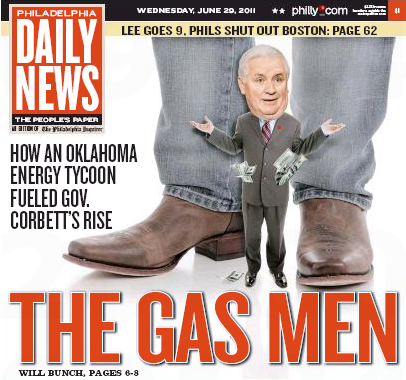 Daily News writer Will Bunch has two high-profile articles about Governor Corbett today, neither of which is very flattering. Nor is the cover of today’s DN, for that matter.

That investment arguably changed not just the history but also the political direction of the state. The influx of cash helped Corbett narrowly win the closest attorney general’s race in Pennsylvania history and propelled him toward the governor’s mansion, where he has now pledged to turn the Keystone State into “the Texas of the natural-gas boom.”

Meanwhile, the hard-charging company run by McClendon, Chesapeake Energy, is the largest and most active driller for natural gas both in Pennsylvania and across the United States – and its environmental record here is under fire for two major well accidents in the past year and allegations from upstate residents of tainted well water.

McClendon wrote a number of large checks that year – before the industry begin looking seriously at Marcellus shale in PA – and it’s impossible to know whether the contribution was shrewd or lucky.

Bunch’s second piece is the story of the Governor’s resume, and a gap therein.

For four years, Corbett worked as an attorney and spokesman for the nation’s largest trash-hauling and disposal firm, Waste Management Inc., in which he advocated for his employer to dump massive amounts of out-of-state garbage in Pennsylvania.

But now that Corbett is governor, his official state biography tells a different story.

His stint flacking for Waste Management has been tossed down what writer George Orwell famously called “the memory hole.” Instead, Corbett’s years in the private sector are described in a way that would cause a casual reader to infer that Corbett started a law practice in 1997 that in fact didn’t exist until five years later.