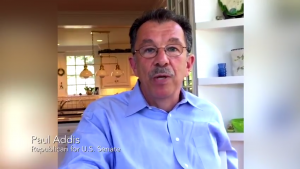 Republican businessman Paul Addis has made it official, he is jumping into the race to challenge Senator Bob Casey next year.

Addis released three videos on his website announcing his bid, giving his criticisms of the GOP, and what he will do to beat Casey.

“I am an imaginative conservative, upset by the GOP’s inability to innovate and set a responsible course. As a citizen and a patriot, I want our government to work better and harder for all of us, for my kids and yours. As a candidate, I will ask difficult questions and develop thoughtful and workable solutions,” his website reads.

Addis is taking a different approach than other candidates, he it touting his opposition to President Trump.

“I didn’t vote for President Trump in 2016, nor did I vote for Secretary Clinton,” Addis starts his ‘To beat Casey’ video saying.

Addis had been considering a run for either Governor or Senate, but focused his decisions on a Senate bid in early April.

His campaign has plans for events around Pennsylvania in the coming week.

Addis is a former energy executive, and was recently a Fellow at Harvard University’s Advanced Leadership Initiative.

Democrats pointed to the growing field of Republican candidates as a benefit for Casey’s chances next year.

“With the addition of Paul Addis, the GOP clown car primary continues. While Republicans will be forced to wade through a costly, brutal primary campaign, Senator Casey will continue to build on his strong record of delivering results for Pennsylvania’s families, workers, and seniors,” Pennsylvania Democratic Party spokesman Max Steele said in an email.

You can view the videos below: