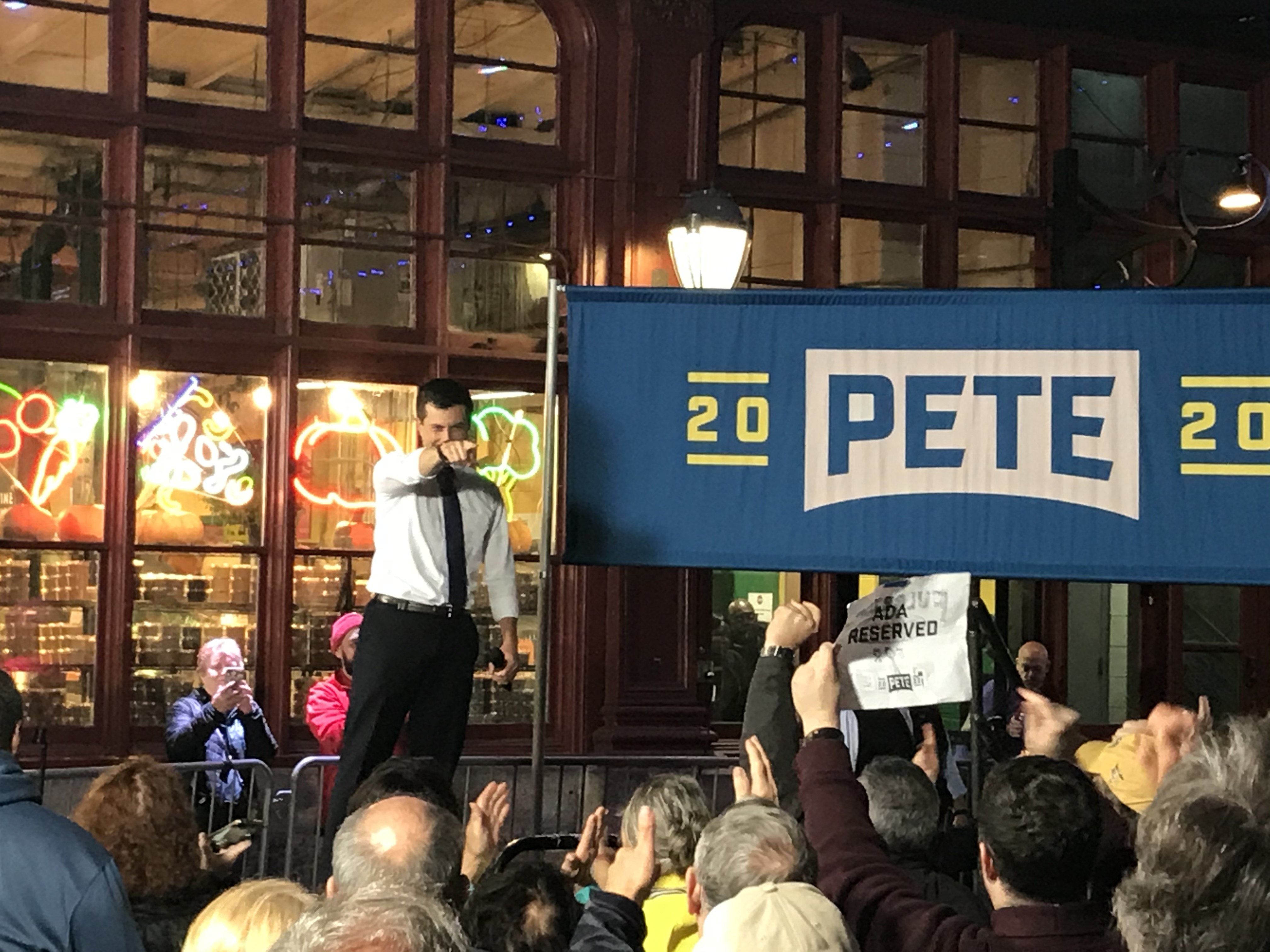 PHILADELPHIA- During a rainy Sunday in Philadelphia, South Bend Mayor Pete Buttigieg made his first campaign appearance in the state of Pennsylvania and detailed his vision for what the country will look like after President Donald Trump and how he believes his party can limit him to one term.

“Remember that everytime my party has taken the presidency in the last half century, it’s been with a candidate who has come from a new generation, who is new to the national scene, who calls America to her highest values, and it’s usually somebody who is the opposite of whatever we just had,” Buttigieg said. “Well, that’s where I come in.”

Buttigieg’s 15 minute address to about 1,000 people outside of the Reading Terminal Market emphasized his call for unifying the nation, that included taking shots at President Donald Trump, but not criticizing those who voted for the current Commander in Chief.

“Because our country is made of people and you cannot love this country if you hate half of the people who are in it,” Buttigieg said.

In 2016, Trump became the first Republican presidential candidate to capture Pennsylvania since George H.W. Bush won the state in 1988. Speaking to a gaggle of reporters after his speech, Buttigieg said that Trump was able to win key battleground states like Pennsylvania because they decided “to vote for anything to burn the house down,” and now that we’re over 2 and a half years into his presidency, it’s time for something different.

“I think that it’s similar to the dynamic in my part of Indiana, where there were a lot of voters so frustrated that they were willing to vote for anything just to burn the house down, they didn’t even like the guy, they just wanted total change,” Buttigieg said. “Now, the house is on fire and you’ve got to do something different.”

Buttigeg, who specifically in the most recent debate, provided a more moderate message in comparison to various other Democratic presidential hopefuls by touting his Medicare For All Who Want It plan. He told reporters after his speech that he believes his message can resonate with a wide variety of people.

“We can have a message that reaches out to rural voters, as well as industrial workers, as well as urban voters about how to make their lives better,” Buttigieg said.

He also pointed to the Democratic Party’s position of advocating for a higher minimum wage, healthcare coverage, and addressing climate change for reasons voters will vote against Trump in 2020. Buttigieg, who has not polled well with African American voters in the primary thus far, also highlighted his Douglass Plan, which he said aims at “ending systemic racism right here in the United States of America.”

During his speech, some of the most pointed attacks Buttigieg delivered at Trump were over who he has selected to lead the offices of Attorney General, Environmental Protection Agency, and Secretary of Education. He also lauded the whistle-blower over President Donald Trump’s recent call with Ukranian President Volodymyr Zelenskiy as someone who is a “patriot.”

While Buttigieg and 2020 Democratic presidential hopefuls have called for impeachment, Trump has dubbed the effort as “the single greatest witch hunt in American history.”

The push to sway voters in Pennsylvania for the upcoming presidential election is well underway. Former Vice President Joe Biden and Sen. Bernie Sanders have both made multiple campaign appearances in the state, with their most recent showing in Philadelphia at the AFL-CIO Workers Presidential Summit. Sen. Elizabeth Warren, who is also widely viewed as one of the frontrunners, spoke to a group of teachers in Northeast Philadelphia in May.

Biden has remained at the top of various Pennsylvania centric polls for the Democratic primary. The Real Clear Politics average shows the Scranton native leading with 22.5%, followed by Warren at 15%, then Sanders polling at 9%, and Buttigieg in fourth place with 7%. NBC10 reports that during the most recent fundraising quarter, Biden raised $938,000 which is more than the other top three Democratic fundraisers in Pennsylvania combined, although Buttigieg raised the second most in the state. Outside of Biden, Trump raised more than any other Democrat in the state during the most recent three month period.

Prior to Buttigieg’s rally Sunday afternoon, he held a $2,800 ticket fundraiser co-hosted by Rep. Chrissy Houlahan (D-Chester), who has not endorsed a presidential candidate yet, and former Congressman Patrick Murphy (D-Bucks), who endorsed Buttigieg’s bid for the White House. 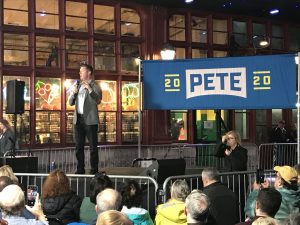 Murphy also opened up for Buttigieg at the rally, and credited the South Bend Mayor and fellow veteran as someone who loved the country and could provide change to Washington DC, while pointing to being the first Democrat in Pennsylvania’s Congressional delegation to endorse then Sen. Barack Obama in 2007 for the nomination.

The Pennsylvania GOP shrugged off Buttigieg’s campaign appearance in the state and echoed their confidence that the state will stay red in 2020.

“It’s no surprise to see Pete Buttigieg campaigning in Pennsylvania following President Trump’s win here in 2016,” said Charlie O’Neill, PAGOP Deputy Executive Director. “However we are confident whoever the Democrats nominate will see the same results as Hillary Clinton.”

Trump and Pence are both making visits to the keystone state this week. Pence will be promoting the USMCA in Luzerne County on Monday, while Trump is set to headline the annual Shale Insight Conference in Pittsburgh on Wednesday. Both are official visits.

Buttigieg briefly touched on the importance that Philadelphia played in the birth of the nation during his speech, but when speaking to reporters afterwards, he provided his thoughts on a hot button local topic – safe injection sites.

While Buttigieg was asked if he supported the implementation of safe injection sites to help curb the opioid crisis, he offered somewhat of an approval for state’s to seek it.

On multiple occasions during his address, Buttigieg likened the Trump presidency to a bad show and stressed that Democrats can’t play his game to take back the White House.

“We can’t go on like this and we can’t keep playing this president’s game,” Buttigieg said. “Remember, if you are on his gameshow, even when you’re winning, you’re losing.”

“The only real answer to this show is to pick up the remote and change the channel to something better,” Buttigieg said.