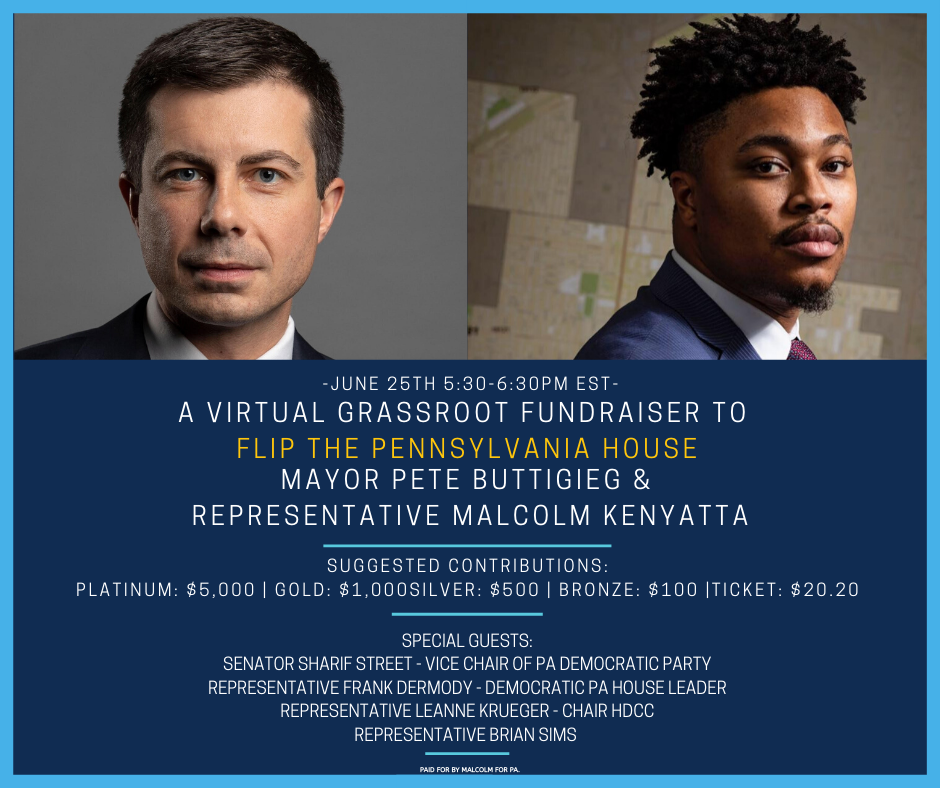 Pete Buttigieg, the former 2020 presidential hopeful and former mayor of South Bend, Indiana is teaming up with state Rep. Malcolm Kenyatta (D-Philadelphia) to headline a virtual fundraiser on June 25, aimed at helping Democrats flip the state House in Pennsylvania.

In a release promoting the event, Kenyatta described the 2020 election as “the most consequential ever,” and added his thanks to Buttigieg for helping Democrats in the Keystone State in their quest to flip the chamber blue.

“It’s an honor to have Mayor Pete join this fight in Pennsylvania,” Kenyatta said in a release. “Our GOP-led House has shown time and again that they are complicit in endangering Pennsylvanians’ lives for their political gain. I sure as hell won’t stand for it, and now Mayor Pete has Pennsylvania’s back.”

This year’s election is more critical than ever. We are excited to have Mayor @PeteButtigieg join me for a major grassroots event to #FlipPA. Pennsylvania has a vital ally in the Mayor as we focus on winning back the state House.

The Pennsylvania House Republican Campaign Committee did not respond for comment.

The suggested contribution for a platinum ticket is $5,000; the suggested contribution for a gold ticket is $1,000, followed by a sliver ticket for $500, a bronze ticket for $100, and lastly a ticket for $20.20 for the June 25 virtual fundraiser between 5:30 P.M. – 6:30 P.M. The special guests for the fundraiser include state Sen. Sharif Street, Vice Chair of the PA Democratic Party, House Minority Leader Frank Dermody (D-Allegheny), HDCC Chair, state Rep. Leanne Krueger (D-Delaware), and state Rep. Brain Simms (D-Philadelphia).

Democrats need to unseat nine Republicans in the state House to flip the chamber blue in 2020.

A Cook Political Report rating released in January had the Pennsylvania state House and Senate as “Leans Republican” for the 2020 election, but a spokesperson from the Democratic Legislative Campaign Committee told PoliticsPA in late December that they believe there is a “very clear path to victory” for Democrats in both chambers.

Although Kenyatta has been one of former Vice President Joe Biden’s most vocal supporters in Pennsylvania since entering the race for the White House, Buttigieg has also voiced his support for the Philadelphia Democrat in recent weeks.