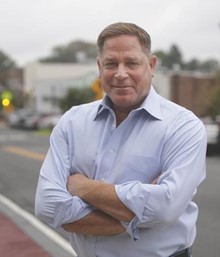 In an internal memo obtained by PoliticsPA, the Dave White campaign believes that the Republican race for the nomination for governor has been whittled to three candidates from nine and that it is White’s race to lose.

Campaign manager Bob Salera sent the memo to supporters informing them that the campaign believes the race comes down to just White, Doug Mastriano and Lou Barletta. He noted that the “anti-endorsement” of Bill McSwain by former president Donald Trump effectively will derail the campaign of the former U.S. Attorney.

“Recent polling, both internal and public, showed a 4-way race that included former U.S. Attorney Bill McSwain, with a quarter to a third of the electorate undecided. But President Trump’s anti-endorsement of McSwain is likely fatal to his campaign.” 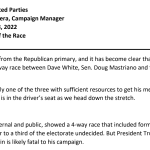 He also cited Trump’s 82 percent favorable rating among Pennsylvania Republicans and the impact that the former president’s support of U.S. Senate candidate Mehmet Oz has already had on that race. Prior to the endorsement announcement, a Fox News poll showed Dave McCormick with a nine-point advantage over Oz. The release of a Trafalgar Group poll last Friday showed a 12-point turnaround, giving the celebrity doctor a three-point advantage.

Salera wrote that “similar movement away from McSwain moves him from a competitive candidate to single-digit support.”

Salera told supporters in the memo that White had raised $2.25 million since the pre-primary report and he was prepared to put the funds to good use.

“Dave White is the only candidate with the resources necessary to run a legitimate television ad
campaign over the last four weeks. As Pennsylvania is one of the most expensive states in the country to run statewide TV, it will take a minimum of $2 million in TV spending to drive an effective message.”

He concluded by reminding supporters that “unless Mastriano or Barletta find some heretofore unseen ability to raise a large amount of money very quickly, they will remain unable to buy the TV ads necessary to broadcast their message to voters not already in their camp. This race is Dave White’s to lose.”

Earlier today, the Barletta campaign announced what was described as a seven-figure ad buy investment that will run through May 17.