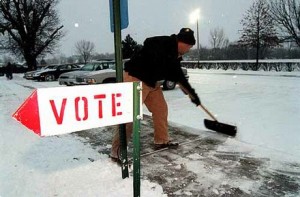 After millions of dollars and months of hard campaigning, several high-profile races could come down to the weather. A huge snow storm moving through Pennsylvania threatens to dampen turnout in parts of western PA that are key to several notable candidates.

The biggest snowfall is projected in the Johnstown/Altoona market, stretching north to the New York border. Up to 12” may fall in Johnstown, and up to 15” in Bradford. Southwestern Pa, including Pittsburgh, will only see a few inches. (Luckily for the candidates, the forecast is continually diminishing).

That’s smack dab in the base of two notable candidates: Tom Smith for U.S. Senate and Mark Critz for Congress. It could also affect a third: Kathleen Kane, candidate for Attorney General, is relying on a strong performance in western Pa. inder to overcome opponent Patrick Murphy’s home base in SEPA.

Jason Altmire’s base in Allegheny and Beaver counties isn’t projected to take a big hit. But in Critz’s home town of Johnstown, snow will continue to accumulate until the Tuesday morning hours when it’s projected to switch to a wintry mix in the morning, and finally rain in the afternoon.

“The doomsday scenario doesn’t look like it will bear out,” he said. But they’ve been following the reports and looking outside. “We’ve been watching it closely since the first reports.”

“It’s stayed warm and there’s barely anything sticking in Johnstown. By tomorrow morning it should be good. We’ve talked to the Board of Elections in case there’s a power outage. There will be paper ballots at every polling place.”

His campaign is looking for silver lining among these clouds.

Smith is the frontrunner in the U.S. Senate race, but with such a low-key campaign, a disruptive weather event could tilt the scales. Steve Welch of Chester County, who has the endorsement of the PAGOP, could benefit. Or it could help Sam Rohrer of Berks County. Neither area is expected to see snow or even much rain.

“That factor is out of our control,” said Smith campaign manager Jim Conroy. “Tom’s supporters are highly motivated, and we think the folks in western Pa will do everything they can to make it to the polls.”

“We’re very confident our folks are going to stay out,” he said of the party faithful. “They stand at polling places in November every year. A little April inclement weather is not going to keep them in.”

As one GOP operative quipped, “When did Steve Welch get God’s endorsement?”