Can Pennsylvania Democrats Pick Up Any US House Seats with Corbett Loss? 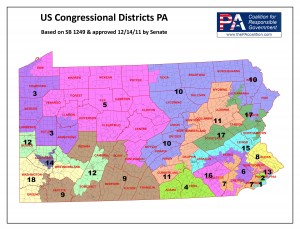 The reelection prospects of embattled Republican Pennsylvania Governor Tom Corbett have been journalistic catnip over the last year, with storylines ranging from failed whispers within the GOP to persuade the governor to retire, to speculation he could be knocked out in a Republican primary, to the very long line of Democratic contenders itching to get a chance at facing the nation’s most vulnerable GOP governor in the general election.

But Pennsylvania Democrats are facing their own struggles – including their attempt to win back a few of the seven U.S. House seats lost between the 2008 and 2012 cycles when the party’s delegation decreased from 12 members to just five.

At the moment, however, most of the 13 GOP congressional districts seem safe, with Mike Fitzpatrick’s 8th CD seat perhaps the most likely to flip.

That means Democrats in Washington are counting on a very strong performance by their gubernatorial nominee at the top of the ticket (with U.S. Rep. Allyson Schwartz the early favorite) to give some of the party’s down the ballot U.S. House hopefuls a chance at victory.

For, as it stands now, a Democratic gubernatorial pick-up in 2014 without the party netting at least two congressional seats would make electoral history in the Keystone State.

A Smart Politics review of Pennsylvania election data finds that the lowest percentage of U.S. House seats elected alongside the party of the state’s winning gubernatorial candidate is 36 percent, set in 1890.

Democrats won the governor’s mansion that cycle with Robert Pattison but carried just 10 of 28 congressional seats.

Since the birth of the modern two-party system in 1828, there have been 42 gubernatorial elections conducted in Pennsylvania that coincided with elections to the U.S. House.

Overall, 765 of the 1,177 congressional seats on the ballot in such cycles during this 185-year span were carried by the winning gubernatorial candidate, or an average of 65 percent.

In 32 of these cycles, the party of the victorious gubernatorial candidate carried at least half of the congressional seats – peaking at over 80 percent nine times:

Over the last 15 cycles since 1954, the only time a gubernatorial candidate has been elected along with at least 60 percent of his party’s U.S. House seats was in 2010 when Corbett and 12 of 19 Republican U.S. House nominees were victorious (63 percent).

In 10 cycles during the two-party era, less than half of the state’s congressional seats – but no less than 36 percent – came from the party of the elected governor, with seven of these cycles taking place during the last 50 years:

As such, if the Democratic Party does indeed take back the governor’s mansion in 2014, it will have to net two U.S. House seats to avoid setting the record for the weakest gubernatorial coattails in congressional races in Keystone State history.

In order to reach the historical statewide average of 65 percent, Democrats would have the unfathomable task of netting seven seats.