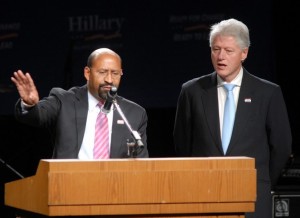 Nutter and Clinton support Hillary for President at a 2007 event

Democratic supporters and Occupy Philadelphia protesters were disappointed Saturday afternoon to learn that Bill Clinton had cancelled a planned appearance with Philadelphia Mayor Michael Nutter due to snowy weather.

About 100 people gathered outside Temple University’s Mitten Hall for a few hours to listen to the former President throw his support behind Nutter, a longtime ally of the Clinton family. The event was cancelled just thirty minutes prior to the scheduled start time of 2:30.

“Today’s campaign rally at Temple University was billed around President Clinton, who is tremendously popular here in Philadelphia. We scheduled the rally because President Clinton called and asked if he could something to be supportive — because we’re friends,” said Nutter in a statement.

According to Nutter’s Director of Communications Sheila Simmons, response to the rally had been very strong. Students from Temple University’s College Democrats and Obama Temple Fall Fellows, a student-run advocacy group that promotes President Obama, were well represented at the rally.

Personnel at the scene also cited the presence of Occupy Philadelphia protesters as a contributing factor to the cancellation.  The protesters could be identified by the clothes and bandannas covering their mouths.