The fight over state liquor stores is now on the air. The conservative group Citizens Alliance of Pennsylvania Wednesday launched an ad that aims to pressure state Sen. Chuck McIlhinney (R-Bucks) into supporting privatization.

“Senator Chuck McIlhinney has a long history of siding with big government special interest groups,” the narrator says. “First, McIlhinney voted for a massive pension increase for himself and government employees. Then Chuck hit taxpayers with a 10% income tax hike.”

“Now McIlhinney is at it again – siding with union bosses who want to keep taxpayers footing the bill for Pennsylvania’s broken government-run liquor store system.”

Harrisburg-based CAP has a history of going after moderate Republicans in recent years, including state Senators, on television, on the radio and via mail pieces. 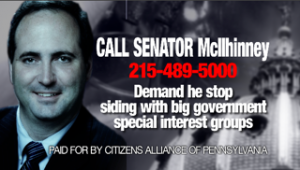 As the 2014 campaign cycle approaches, few members of the legislature has as much of the spotlight as McIlhinney. He chairs the Senate committee which will shape that chamber’s version of a bill that would sell off the state’s liquor stores and is himself a swing vote on the measure.

It’s a major priority for Gov. Tom Corbett, who based much of his budget math on the proposal and is keen to deliver on a big agenda item. The measure polls very well across the board and has long been a policy goal of the Governor’s conservative base.

Supporters say the bill would be more convenient for consumers and eliminate a non-essential government activity. Opponents say the move would threaten thousands of jobs. Various interests – from existing distributors to gas stations to big retailers – all have a stake in the myriad details of the plan.

But McIlhinney said he would have voted against a version of the bill passed by the state House a few weeks ago because it would disadvantage small businesses – namely beer distributors – which have adapted to current rules.

Update: McIlhinney’s campaign swung back against CAP, calling the ad a misfire.

“It’s odd that the day after Senator McIlhinney appeared on the Dom Giordano show touting privatization and how to make the House bill even stronger that CAP would choose to run such a negative, baseless attack,” his campaign said in a statement. “It’s obvious CAP is nothing more than a front for big special interests who would profit from privatization at the expense of our local small businesses. CAP’s misguided effort to distort the legislative process in favor of special interests will not deter Senator McIlhinney from doing what’s right for Pennsylvania’s taxpayers and consumers.”

You can listen to his Giordano interview here. Notably, McIlhinney was bullish about privatizing the liquor stores, characterizing the House plan and Gov. Corbett’s plan as watered down. He compared the rush to pass HB 790 to Obamacare.

“I fully intend to put forth a proposal to privatize the state stores,” he said.

“My proposal that I wanted to do was clearly a privatization and close the state stores. Did not have the support of the unions.”

It could be an opening salvo by CAP against the Senator. The group makes a practice of supporting conservative challengers in Republican primaries. Newtown Township Supervisor Rob Ciervo has already threatened to challenge McIlhinney over the liquor issue.

Ciervo met with CAP and some of its major donors at the Pa. Leadership Conference last weekend.

The group’s Executive Director Leo Knepper called the ad buy “modest,” but suggested his group would sustain it as long as necessary.

“Our hope is that by educating the Senator’s constituents, they will call his office and voice their support for privatization,” Knepper said. “We are buying ad time on a weekly basis. We have the resources available to support the ad campaign through the entire summer and beyond.”

McIlhinney’s Bucks County district is generally safe for Republicans, although a bloody primary could open the door for a strong Democrat.

Though it lies in the expensive broadcast television market, three factors make it possible for CAP to have a noteworthy impact in SD-10 with relatively light spending.

First, southeast Pa. is one of the best places in the country to use cable TV ads. Cable saturation (the relative percentage of voters who have cable subscriptions versus broadcast alone) is much higher there than the state or nation as a whole.

Finally, the viewership CAP wants to target is conservative. That means they could reach most of their target audience with a Fox News-only ad campaign.

Here is the full transcript:

First, McIlhinney voted for a massive pension increase for himself and government employees.

Then Chuck hit taxpayers with a 10% income tax hike.

Now McIlhinney is at it again – siding with union bosses who want to keep taxpayers footing the bill for Pennsylvania’s broken government-run liquor store system.

Tell him to start siding with taxpayers and finally get the government out of the booze business.