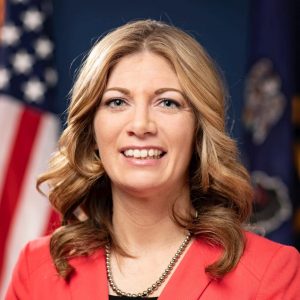 State Sen. Katie Muth (D-Montgomery) went viral during the summer after delivering a speech on the Senate floor about general assistance funding. On Monday, Muth talked about that program, which has since been cut, corruption in Harrisburg dubbing the state Capitol as the “Dome of Corruption,” her opposition to Gov. Tom Wolf’s Restore PA plan and more at the PA Press Club.

During her appearance Monday, Muth distanced herself from those in the party open to bipartisan compromise in Harrisburg and made the push more left-leaning policies. She said was open to compromise as long as she’s not compromising on any of her beliefs and described working in the state Capitol as a fight for one’s soul. She also questioned whether the majority GOP leaders “have a moral compass.” It is becoming increasingly clear that Muth is positioning herself as one of the most outspoken voices on the left in the state Senate.

Capitolwire’s Bureau Chief Chris Comisac has the details of the address.

When asked what she thought about compromising to get things accomplished, she said she’s open to compromise, as long as she’s not compromising on any of her beliefs, along with a list of a few more caveats that seemed to imply she’s not too interested in getting anything less than what she wants as part of her “revolution.”

Regarding that revolution she said is growing in Pennsylvania, Muth indicated the goal is to change government and Pennsylvania so that it’s “fair.” However, being “fair” is a pretty subjective thing in the hands of a politician, particularly a politician that seemed to embrace other people characterizing her as “radical.”

Muth did acknowledge she doesn’t have the votes at the moment to accomplish the many changes she’d like to see occur in Pennsylvania and its state government, indicating there might be 20 members in the 253-member General Assembly (she said there’s “a solid 10” in the Senate) that are part of “the revolution,” so she urged people to send more lawmakers to Harrisburg wanting to make those changes.