Cartwright: Holden Not Worried About Cancer 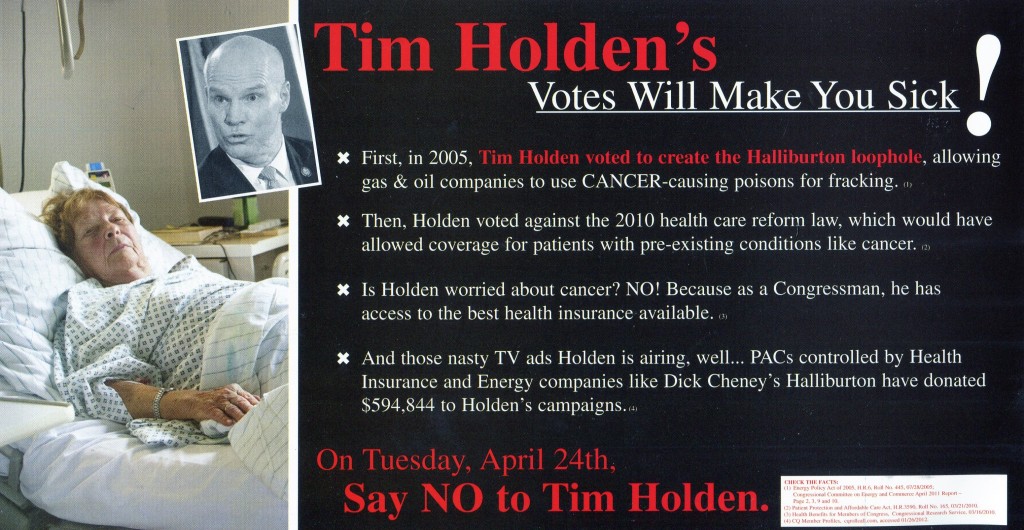 Matt Cartwright’s latest campaign mailing takes a harsh jab at Rep. Tim Holden, saying he isn’t worried about cancer. The piece that links Holden’s votes against Obamacare and for a bill containing the ‘Halliburton loophole’ with the fact that he enjoys the standard health plan for members of Congress.

“Is Tim Holden worried about cancer? NO!” the mailer declares. “Because as a Congressman, he has access to the best health insurance available.”

“It is ridiculous to claim, enthusiastically, that Tim Holden is not ‘worried about cancer.’ It’s one of the worst and blatantly false political ads I’ve ever seen,” Nagy added.

It’s especially outrageous, his campaign says, because Holden’s signature accomplishment during his two decades in office was his successful effort to obtain $40 million in federal funding to build the Penn State Hershey Cancer Institute.

Cartwright’s campaign didn’t back down from the mailer.

“We stand 100 percent behind the facts in our ads and mailings,” the campaign said in a press release. It referenced a 2011 report by Energy and Commerce Committee Dems that linked hydraulic fracturing – the main subject of the so-called ‘Halliburton loophole’ – to carcinogens.

“It is a bit disingenuous for Tim Holden to cry foul at the 11th hour, after the dirty, lie-filled campaign he has run,” said Cartwright campaign manager Shane Seaver.  “Holden has tried to smear Matt Cartwright’s reputation for weeks but the voters are not buying his lies. Now he wants to pretend that he is the aggrieved party.”

It’s the second time cancer has become an issue in the campaign. Holden’s campaign briefly aired an ad (view it here) criticizing Cartwright’s law firm PAC for contributing to a judge – Michael Toole – who later presided over a case he argued.

In a very effective parry, Cartwright’s campaign cast an ad that was meant to be indictment of the legal culture in northeast PA as an attack on the specific client in the case. It was Michele Kachurak, a woman who had been misdiagnosed with cancer and undergone chemotherapy.

It worked – Holden pulled the ad and soon thereafter called for a negative ad ceasefire, which Cartwright accepted.

But too late to pull this mailer, according to several direct mail consultants PoliticsPA spoke with. They agreed that Thursday, the day the ceasefire was declared, would likely have been too late to halt the piece.

This is the other side of the Cartwright mailer: 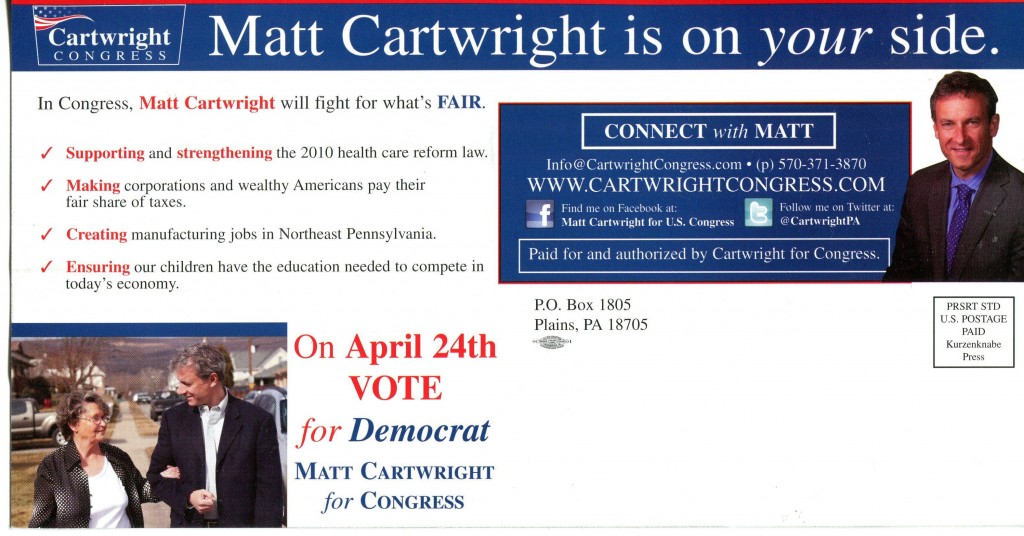