Recent polls have shown the U.S. Senate race tightening, and it looks like Bob Casey’s campaign is taking it seriously. The freshman Democrat is up today with a new attack ad which aims at a middle-vs-millionaire message and pulls no punches. 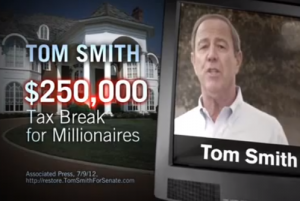 “But here’s what he really means,” an announcer cuts in. “Tom Smith’s plan would give millionaires like himself a $250,000 tax break, while the average middle class family would get a $2,000 tax increase. Unless you’re a millionaire, Tea Party Tom Smith’s not your cup of tea.”

Casey’s commercial features a sample of opponent Tom Smith’s most recent ad in which the Republican lists among his policy positions, “Simplify the tax code with no giveaways to special interests.”

Update: The $250,000 tax cut is part of Smith’s plan, but the ad’s reference to $2,000 in middle class tax increases is a hit on the Paul Ryan budget. Though Smith incorporated elements of that budget into his own platform and has expressed support for Ryan’s budget in the past, it’s not perfectly accurate to say that it’s part of “Tom Smith’s plan,” as the ad does.

Both campaigns have been on television for weeks with a mix of positive and negative ads. Casey has sought to paint Smith as a Tea Party extremist; Smith has sought to cast Casey as a tax and spend liberal. However, Smith has been alone on the air in the expensive Philadelphia market which includes 40 percent of Pa. voters.

The latest poll, from the Morning Call and Muhlenberg College, showed Casey leading Smith 44 percent to 36.