According to The Pittsburgh-Post Gazette Early Returns blog, the ad, titled “American People,” is airing in the Pittsburgh market only.

The ad starts by playing a clip of Smith speaking to a crowd, asking “Does anybody in this room think the American people are afraid of a good competition?” Casey responds to this by attacking Smith’s support for unfair trade laws, and lays out his own plans. 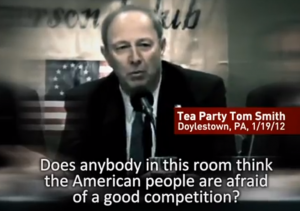 Smith’s campaign manager Jim Conroy told the PG that this new attack is a sign that Casey is in trouble this November.

“Bob Casey’s latest disingenuous attack is further evidence of a race that is growing more competitive, sooner than many predicted. Unfortunately for Senator Casey, this election will be about jobs – and in November voters will have a clear choice between Tom Smith, a small businessperson and proven job creator versus Senator Casey, an ineffective career politician whose policies have led to more than 40 months of unemployment greater than 8 percent.”

But Casey’s Campaign Manager Larry Smar said that the new ad is just a means of leveling the playing field against Casey’s self-funding opponent.

“Tea Party Tom Smith has already spent $3 million on attack ads. Of course, we are going to contrast Bob Casey’s record of fighting for Pennsylvania jobs with Tea Party Tom Smith’s support for policies that will send jobs overseas.”

Like Casey’s first ad, this new ad is only airing in the Pittsburgh media market. This suggests that the Senator feels vulnerable in Smith’s stomping grounds of western PA. While Casey still enjoys a comfortable lead over Smith, this negative ad could be a sign that the Dems feel the race is closer than polls indicate.