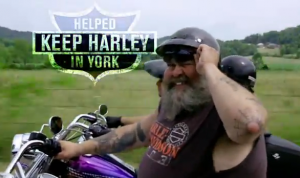 “I’m the last guy you’d expect to say good things about a Senator. But I gotta give Bob Casey credit,” says the biker. He talks about Casey’s work to keep open an air force facility in western PA, win flood relief funding for northeast PA, help veterans open businesses, and keep open the Harley Davidson plant, which is in York, Pa.

The one down side? The ad may not earn him much street cred. The biker concludes: “Just too bad he doesn’t know how to ride a bike”. That’s followed by Casey seemingly chuckling while approving the message.

It’s Casey’s second ad of the general election; the first one was also positive. They were produced by three firms, each including a member of Casey’s 2006 media team: Shorr Johnson Magnus, Putnam Murphy Media, and Murphy, Vogel, Askew, Reilly.

With much higher name ID and a healthy lead in most polls, the freshman Democrat is free to boost his own positives – not a bad thing for someone whose name recently surfaced as a potential 2014 challenger to Gov. Tom Corbett.

“Bob Casey, a failed senator zero who has never passed a bill clearly needs to dig pretty deep to point to an accomplishment,” he said. “Meanwhile, the national debt has surpassed 16 trillion and millions of Americans remain unemployed while Senator Casey has failed to offer a plan. Tom Smith, a proven job creator has detailed plan to reduce the debt and get Pennsylvanians back to work.”

Casey’s campaign didn’t divulge details of the buy, but both they and the Smith campaign will suspend their TV campaigns for September 11th.