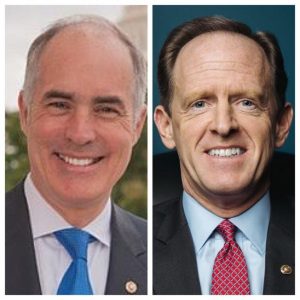 “There are legal and constitutional arguments both favoring and opposing an impeachment trial of a former president,” Toomey said in a statement following his vote.

“In my view, the text and context of the Constitution, the meaning of the term ‘impeachment’ to the founders, and the most relevant precedents indicate that it is constitutionally permissible for the Senate to consider the impeachment of President Trump,” Toomey continued. “When President Trump’s impeachment trial begins on February 9th, I will again fulfill my responsibility to consider the arguments made by his lawyers and the House managers.”

On January 13, the House voted 232-197 to impeach Trump, charging him with “incitement of insurrection” over the riots that took place at the Capitol building in Washington D.C. on January 6, following a rally led by Trump. Pennsylvania’s 18 member Congressional delegation fell entirely along party lines during the House impeachment vote – All 9 members of Pennsylvania’s Democratic delegation voted to impeach Trump, while all 9 Republicans voted against it.

Following the January 6 riots at the Capitol building, Casey called on Vice President Mike Pence to invoke the 25th Amendment to remove Trump from office, while Toomey urged Trump to resign.

Casey has publicly voiced support for the Senate to convict Trump. Toomey did not answer questions on whether he’s made his mind up about convicting Trump or not, according to the Morning Call.