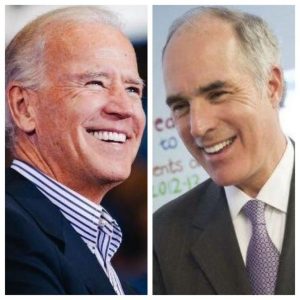 It didn’t take long, but one Scranton native endorsed another for the Presidency.

Just minutes after Biden made his bid official with a video announcement, Casey offered support through a press release and social media posts saying he was proud to endorse his friend for president.

“At this make-or-break moment for the middle class, our children and our workers, America needs Vice President Joe Biden to be its next President,” Casey said. “Joe Biden has spent a lifetime fighting battles on behalf of hardworking Americans while ensuring America’s values and interests are represented abroad. As both a U.S. Senator and our Vice President, he has delivered results for the middle class, kept our country safe and strengthened our standing in the world.”

Casey’s press release lauded their working relationship while they served briefly in the Senate together and during Biden’s eight years as Vice President. His statement also delivered shots at the Trump presidency and Congressional Republicans for “betraying the middle class” and made the case for Democrats to regain control of the White House, Pennsylvania is a must win and his belief that Biden can deliver the state.

According to Politico’s Holly Otterbein, Cartwright is currently the only other elected Pennsylvania Democrat to endorse Biden’s bid for the White House.

The previous two presidential candidates Casey endorsed went on to win the Democratic nomination. He endorsed then Sen. Barack Obama in March 2008 and endorsed Sec. Hillary Clinton in April 2015.

In addition to holding a fundraiser in Philadelphia tonight, Biden is set to campaign in Pittsburgh on Monday at the Teamsters Local 249 hall. This appears to be his first public appearance as a declared candidate. The Philadelphia Inquirer’s Jonathan Tamari reports that Biden will hold a rally in Philadelphia on May 18.

It is unclear if Casey will be joining Biden at either rally as of now.

The Pennsylvania GOP issued a statement this morning about Biden’s entrance into the race. The press release noted his two previous unsuccessful bids for the Democratic nomination and tied his record of being Obama’s Vice President as a negative while seeking the office and said a Biden presidency would return the country to “some of its least promising days.”

“Joe Biden helped President Barack Obama oversee the worst economic recovery following a recession in this country’s history,” said PAGOP Chairman Val DiGiorgio. “On top of that, Joe Biden was a key adviser to eight years of a Presidency that resulted in the terrible Iran nuclear deal, turned a blind eye to Russian interference in the 2016 election, attacked religious organizations, forced unrealistic government mandates onto Americans, and pushed Americans into a health care system where they could not keep doctors they liked and are forced to pay increasing premiums.”

Biden remains the front runner in the Democratic primary in Pennsylvania according to recent polling. An Emerson College poll and Morning Call/Muhlenberg College poll show Biden holding double digit leads over the rest of the crowded field. Sen. Bernie Sanders is a distant second in both of those polls.