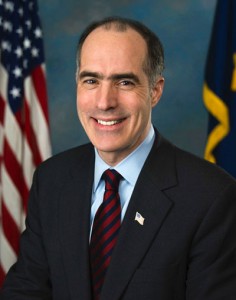 Sen. Bob Casey is the latest in a series of pro-gun Democrats to voice their support for new restrictions on firearms in the aftermath of the shootings in Newtown, Connecticut. He had previously opposed renewing the ban on assault weapons.

He said he’d like to see a ban on assault weapons as well as high capacity magazines (more than 10 rounds per clip).

“If those two bills come before the Senate, I’ll vote for both,” Casey said in a lengthy sit-down interview with Jonathan Tamari of the Philadelphia Inquirer.

“Work that we do doesn’t always bring you to that kind of deliberation or consideration. This has, for me, and I have to, and I think I should, vote that way on those two” measures, he said.

It’s a departure from his stance in the aftermath of the Aurora, Colorado theatre shootings, when – campaigning for re-election – he said he’d still oppose such a ban.

Casey had an “A” rating from the National Rifle Association in 2006 and a “B+” during the election this year. Despite a generally pro-incumbent approach, the NRA declined to make an endorsement in his campaign versus Republican Tom Smith.

He said the Newtown shooting was different from Aurora.

“The power of the weapon, the number of bullets that hit each child, that was so, to me, just so chilling, it haunts me. It should haunt every public official.”

“I’ve been around government and public policy a long time, and I can’t think of another time when I had these same feelings,” he said. “I don’t really care if people criticize me for having emotions about this. It probably helped me think about it in a different way.”

He said his wife Terese also challenged him to change his position.

He follows other Democratic Senators like Harry Reid of Nevada and Mark Warner of Virginia who have said recently that they would support such measures. Sen. Joe Manchin of West Virginia has sent mixed signals about his willingness to support such a move.

“There’s no question I’ll be open to criticism, and I understand that,” Casey said. “I just believe that in light of what’s happened, in light of measures we can take to lessen the chances that will happen [again], that these are two steps we can take.”