Sen. Bob Casey uses his final ad of the 2012 campaign to talk directly to voters and defends his brand of low-key bipartisanship.

He’s facing a surprisingly tough challenge from Tom Smith, a Republican and political neophyte who has spent months casting Casey as ineffective. 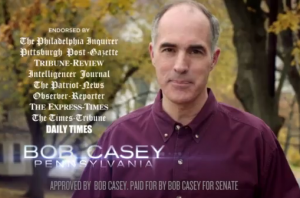 Casey has taken lumps from the press for being a low profile candidate who hasn’t effectively communicated his message to voters.

This ad shows that the freshman Democratic Senator listened to the criticism.

“Unfortunately for Pennsylvania Bob Casey, the Senate’s most ineffective legislator, has been a partisan rubber stamp for failed policies that have destroyed jobs and buried future generations under a mountain of debt,” said Conroy. “With no plan to save Medicare, reduce the debt or grow the economy, Senator Zero is simply offering more of the same.”

Smith’s campaign, meanwhile, released a web video that doubles down on its characterization of Casey as “Senator Zero.” It’s essentially a supercut of Smith’s television ads.

“I’m running because I’m fed up with what Senator Bob Casey and the political class have done to America,” says smith in the video. “Here’s my plan to hold the politicians accountable. Pass a balanced budget amendment, simplify the tax code, with no giveaways to special interests. And if Congress doesn’t pass a budget, they don’t get paid.”

Chatter around Pennsylvania’s Senate race has continued to grow as the race has become closer and closer. Despite Casey’s separation in the past couple weeks, the National Journal has upgraded the race to number 13.