Casey in Harrisburg: “They are Coming for You” 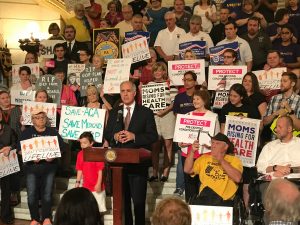 “We have to stop them from enacting a bill that will hurt the people of Pennsylvania,” Casey said during the event.

Pennsylvania Insurance Commissioner Teresa Miller also spoke at the press conference.  Both Casey and Miller focused the majority of their remarks on the effects of the BCRA on Medicaid in Pennsylvania.

“This bill would devastate the Medicaid program,” Miller said.

“Here’s the deal, if you have employer coverage, they are coming for you too,” Casey said

“Don’t think you are in the clear because we are talking a lot about Medicaid, this bill is bad for the whole country.”

Senator Pat Toomey, who was part of the panel who wrote the bill, put out a fact sheet arguing against the claims made by Democrats about the effects of the BRCA on Medicaid.

“No one is kicked off the program, and no one loses their federal Medicaid eligibility. CBO makes a highly dubious prediction that millions who are eligible for free health insurance will refuse free Medicaid coverage if the individual mandate is repealed,” the fact sheet read.

The BRCA will likely be a major part of the messaging for Casey’s campaign leading into 2018, as the Affordable Care Act was a major part of Republican campaigns in 2010.