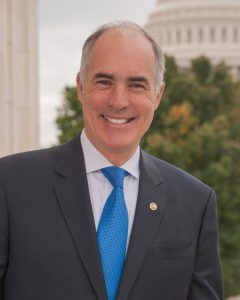 Senator Bob Casey announced his campaign raised $2.6 million in the second quarter.  Casey ended the quarter with $5.5 million on hand.

“Pennsylvanians know they can count on Bob Casey to fight for them and deliver results for workers, families, and seniors. Senator Casey’s fundraising pace and the broad support from hardworking Pennsylvanians demonstrate that the campaign is strongly positioned to compete in 2018,” Casey’s campaign manager M.E. Smith said.

Casey’s donations came from all 67 of Pennsylvania’s counties, and 93% of the donations were under $100.

Casey outraised Senator Pat Toomey for the same period in 2015.  Toomey raised just under $2 million in the quarter. Toomey’s cash on hand in the same period was higher than Casey’s, Toomey had $8.3 million.

The National Republican Senatorial Committee responded to Casey’s fundraising and continued their message of Casey moving to the liberal wing of the party.

“Bob Casey will need every cent he can raise to defend his record of obstruction in the Senate. While Casey continues to pander to liberal activists, Pennsylvania voters can see him for what he really is – a typical liberal career politician,” NRSC spokesman Bob Salera said in an email.