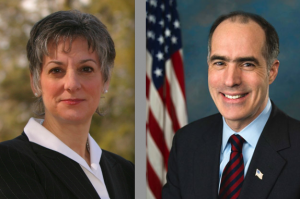 This morning, the United States Congress unanimously passed an extension of the payroll tax cut for another 2 months.

At the same time, Congressional leaders also named conferees to the conference committee that will negotiate the additional 10 month extension that both parties want but disagree on how to pay for.

Sen. Casey sponsored the full year payroll extension bill in the senate which became the legislative vehicle in which the conference report will come to the floor of Congress.

Rep. Schwartz has a great deal of expertise with health care issues. Included in this legislation is the ‘doc fix,’ dealing with the rates Medicare pays doctors. A political ally of the medical community, she can be counted on to advocate for favorable reimbursement rates.

A spokeswoman said Schwartz will look to restructure the payment system to reward quality, value and efficiency, as opposed to the current system which incentivizes volume and drives up cost.

The other House Democratic Conferees are Xavier Becerra of California, Sander Levin of Michigan, Chris Van Hollen of Maryland and Henry Waxman of California.

Sen. Minority Leader Mitch McConnell has yet to name his conferees, but there is a decent chance that Sen. Pat Toomey will be included.

“At a time when almost 500,000 Pennsylvanians are out of work, I am grateful for the opportunity to continue my work to reach a bipartisan compromise that protects working families and provides more take-home pay for 160 million Americans by ensuring a full year extension of the payroll tax cut.  I thank Majority Leader Reid for the appointment and his leadership on this issue, and I look forward to working with Democrats and Republicans on an agreement that is in the best interest of Pennsylvania and the American people.”

“I have always worked across the aisle to find common ground on the most important issues facing our nation. We need to put aside our differences in order to protect our economic recovery. I am honored to have been appointed to this joint committee and will work to prevent a tax increase on middle class families and preserve the quality health care America’s seniors deserve.”