Casey to Campaign for Biden in New Hampshire 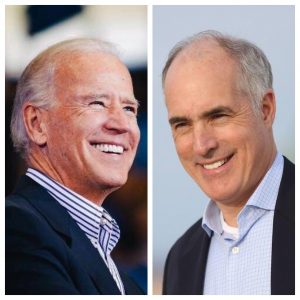 Casey will travel to Manchester, New Hampshire on Friday afternoon and participate in a phone bank with volunteers of Biden’s presidential campaign at their Manchester field office.

“Senator Casey is excited about the opportunity to travel to New Hampshire to campaign for Vice President Biden,” Casey spokesperson John Rizzo said. “He’s looking forward to talking to voters and volunteers about why he thinks Vice President Biden will be a great President.”

Casey was one of Biden’s earliest supporters during this bid for the White House, formally endorsing the fellow Scranton native just minutes after Biden officially launched his campaign.

The RNC said in a statement that Casey’s campaign visit for Biden raises “red flags” for Pennsylvanians.

“Red flags are raising for Pennsylvanians as Senator Bob Casey teams up with Joe Biden, especially while Americans are demanding explanations for the corruption surrounding Quid Pro Joe, his son and their dealings with Ukraine,” RNC Spokesperson Christiana Purves said. “If Casey wants to campaign with Joe Biden, he should have to answer to the American people as to why he’s ok with ignoring Biden’s abuse of power.”

Casey, along with all nine Pennsylvania House Democrats, support the impeachment inquiry into President Trump and his dealings with Ukraine.

Last Wednesday afternoon, Casey issued a statement saying that Trump’s conversation with Ukranian President Volodymyr Zelenskiy about Biden’s sons business dealings in the country, was a “textbook case of abuse of power which demands action.”

3 thoughts on “Casey to Campaign for Biden in New Hampshire”