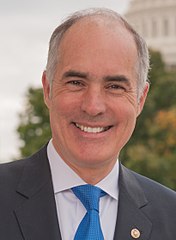 This morning, Casey’s office released a statement followed by a series of tweets stating his opposition to President Donald Trump’s selection for the United States Supreme Court. The seat, vacated by retiring justice Anthony Kennedy, is expected to be filled in the coming months with Trump set to announce his nominee tonight at 9:00 PM.

“I will oppose the nomination the President will make tonight because it represents a corrupt bargain with the far Right, big corporations, and Washington special interests,” said Casey in a statement.

Hardiman was reportedly on the shortlist of candidates to replace the vacancy left by the late Supreme Court Justice Antonin Scalia. Last year that seat was filled by Neil Gorsuch.

“Bob Casey is so blinded by partisanship that he is opposing a nominee for the Supreme Court before the pick is announced. How can you condemn a nominee before she or he has been named, and then declare your opposition to that person before you have even met with them?”

The NRSC also wasted no time in weighing in on Casey’s opposition to the announced nominee.

“Bob Casey’s opposition to President Trump’s nominee before he or she has even been named shows he has given up any pretense of being a moderate voice,” said NRSC Spokesman Bob Salera. “Casey’s willingness to oppose any nominee off of a list that includes judges he has previously voted for shows he will oppose President Trump at all costs, even when doing so makes him look like a partisan hack.”

“This list is the bidding of corporate special interests hell-bent on handing health care over to insurance companies, crushing unions that represent working men and women, and promoting policies that will leave the middle-class further behind,” said Casey. “Any judge on this list is fruit of a corrupt process straight from the D.C. swamp…I was elected to represent all Pennsylvanians. I was not elected to genuflect to the hard Right, who are funded by corporate America.”

“Unfortunate (though not surprising) that even before his or her qualifications can be evaluated, Sen. Casey is refusing to even consider the President’s #SCOTUS nominee.”