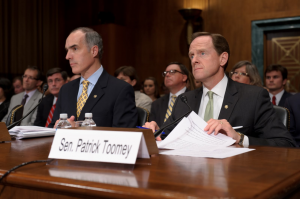 Both Senator Bob Casey and Pat Toomey spoke warmly of the judicial nominees to the US District Court of the Middle District of Pennsylvania. The nominees will fill vacancies left by Judge A. Richard Captuo and Judge Thomas I. Vanaskie that have gone unfilled since 2009 and 2010 respectively.

The Senators stressed the importance of collaborating across parties to ensure that the two nominees, Matthew Brann and Malachy E. Mannion, are the best choices.

Matthew Brann is a 47 year-old Bradford County Republican attorney from Canton. For the past 17 years he has served as a partner for the law firm Brann, Williams, Caldwell & Sheetz where he specialized in tort, contract, commercial, real estate, estate planning, probate, and real property litigations.

Outside of law, Brann has served as Chairman of the Bradford County Republican Committee and is currently on the Board of Directors of the Five Rivers Council of the Boy Scouts of America.

“Matthew Brann has a wealth of legal experience gained from more than two decades in private practice, and I look forward to seeing him on the federal bench in Williamsport soon,” Sen. Toomey said. “Malachy Mannion has served honorably for more than a decade as a U.S. District magistrate judge, and his intellect, experience and knowledge of the law will serve him well in his new role.

Judge Malachy E. Mannion, a 58-year-old Democrat from Lackawanna County, has spent time as a partner for a law firm, an attorney, and a prosecutor. Since 2001 he has served as a magistrate judge in the Middle District. He has no history of political contributions.

“Malachy Mannion has served the public as a U.S. Attorney and as a Federal Magistrate Judge, and I will push for a speedy confirmation process in the Senate. I have known Mal for years and he is an excellent lawyer whose integrity is beyond reproach,” Sen. Casey said. “Matthew Brann, along with an impressive career in private practice, has demonstrated a commitment to the community that will make him an outstanding judge.”

“Recommending and confirming strong judicial candidates is among the most significant responsibilities of a U.S. Senator,” Casey continued, “which is why I’ve worked in a bipartisan fashion with Senator Toomey to make sure excellent candidates are nominated and confirmed.”

Next the nominees will go before the Senate to be approved. Only then can they take on the judgeships.