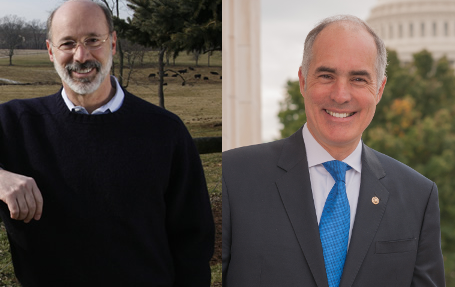 U.S. Senator Bob Casey and Governor Tom Wolf, who are both running for re-election, will speak at the Pennsylvania Democratic Party’s Keystone Dinner.

The dinner will be held Friday night ahead of the party’s state committee meeting Saturday.  The dinner and meeting will both be held at the Hilton Hotel in Harrisburg.

Casey and Wolf’s speeches will be their first to state committee this year with both of them facing re-election.

At Saturday’s meeting, the state party will elect a new Chair, Vice Chair, and Treasurer who will serve until June and an election for a full term will be held for all of the seats.

The party is electing a new short term Chair following the resignation of Marcel Groen from the position partially because of his response to sexual harassment allegations against elected officials in the state.

The party will also vote on a “comprehensive sexual harassment code of conduct” according to a the media advisory announcing the speakers.