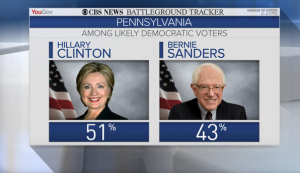 Tuesday night should be a happy one for Hillary Clinton and Donald Trump, according a new CBS News/YouGov poll.

Former Secretary of State Clinton is leading Vermont Sen. Bernie Sanders by eight points in PA (51-43%), while Donald Trump leads his competitors by more than 20 points.

On the Democratic side, 10% of voters have yet to make up their mind, giving Sanders some hope for another upset over the front-runner.

Two-thirds of Democrats in the state see Clinton as the most electable candidate, though two-thirds see Sanders as more authentic and 61% see him as more honest and trustworthy, according to the poll.

Almost a fifth of likely Sanders voters will cast their ballots as a vote against Clinton, and half of them will be “dissatisfied” or “upset” with Clinton as the nominee. Still, 79% of PA Democrats think Clinton is “very likely” to be the nominee.

Sanders does best among voters 18-44, beating Clinton by more than 20 points, while Clinton holds a similar edge over Sanders with voters over 45. Clinton’s eight-point lead could be, in part, attributed to Pennsylvania having one of the oldest populations in the country. 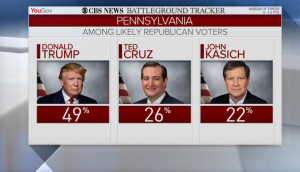 A 20+ point margin in PA, along with a win in Indiana on Tuesday, would keep Trump on track to secure the nomination before the Republican National Convention in Cleveland in July by reaching the magic 1,237 delegate mark.

Trump needs to pick up just under 400 of the remaining 733 delegates to avoid a brokered convention. Cruz would need to win 678 delegates in the next month and a half to win the nomination outright.

Kasich’s only hope for the nomination is winning at a brokered convention in his home-state, needing to 141% of the remaining delegates.

Trump holds a slim 5-point advantage over Cruz and leads Kasich by 20 points in the Hoosier State, according to the CBS News/YouGov poll.

PA Trumps supporters believe the primary process is unfair, though their candidate is leading in the state and in the delegate race. 68% of Republicans in the state said delegates should back whichever candidate wins the popular vote.

22% of Republicans will head to the polls on Tuesday to use their votes to stop Donald Trump.

Voters in Pennsylvania, Maryland, Delaware, Connecticut and Rhode Island will head to the polls on Tuesday, making it the second biggest day left on the primary calendar.