The U.S. Chamber of Commerce has chosen its final target of the 2012 cycle, and it’s U.S. Senator Bob Casey. The national business group launched a television ad slamming the Democrat in western Pa.

The ad is fairly standard: it hits Casey for his vote in favor of Obamacare, his vote for Cap and Trade, and his vote for environmental regulations on coal. 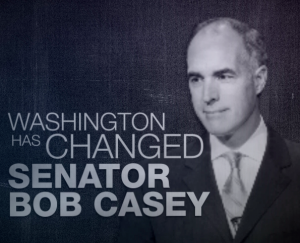 “We sat down and looked for the one seat in the country that could make the majority,” said Rob Engstrom, the Chamber’s national political director. “We think Casey is vulnerable. His lackluster campaign has given us a window.”

He said the Chamber doesn’t discuss the dollar amount of its ad buys, but said it was airing in the Pittsburgh market and that the Chamber had bought up all available space, beginning Thursday night.

“Big money and Washington special interests are on Tom Smith’s side as big business and Tea Party groups come to his aid,” said Casey Campaign Manager Larry Smar. “Bob Casey has a record of promoting energy jobs and supporting tax policies that benefit middle class families, while Tom Smith is pushing extreme policies that will give tax breaks to millionaires like himself and raise taxes on middle class families.”

It’s the fourth outside group to jump on TV in the race – mostly in the Pittsburgh market. These are the first three: