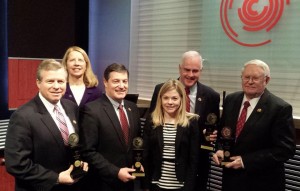 As part of their efforts to keep businesses in the minds of legislators, the U.S. Chamber of Commerce awarded three Pennsylvania representatives with the Spirit of Enterprise Award for pro-business voting.

Congressmen Lou Barletta (R-Luzerne), Joe Pitts (R-Reading), Pat Meehan (R-Delaware), Jim Gerlach (R-Chester) and Keith Rothfus (R-Allegheny) each received the award. The Chamber annually gives the award to legislators based upon their votes regarding critical business legislation, which is documented in the Chamber’s publication entitled “How They Voted.” Those members of Congress who supported the Chamber for at least 70% of those votes qualify for the award.

For 2013, Barletta received a score of 92% with an overall 95% mark for his career in Congress. This is the third time he has won this award.

“As the economic recovery continues to be sluggish, it is more important than ever to support policies that encourage businesses to grow and hire more employees,” Barletta said. “I am honored to be once again chosen by the Chamber, because we really have the same goals in mind – a better, stronger and more prosperous America.”

“The most important thing we can do in Congress is create a climate for job creation,” said Pitts. “Too many Americans have given up looking for work. Too many are working part time when they need a full time job. If we want a brighter future for our country, there have to be more opportunities for good jobs.”

Rothfus, who received a 77% rating in his first year, also responded gratefully to the award.

“Growing our economy and adding jobs are two of my top priorities as the employee of 700,000 Western Pennsylvanians,” he stated. “I will continue working daily to reduce excessive government regulations, pursuing effective health care reforms, and make energy more affordable.”

The Chamber honored a total of 206 House members and 32 Senators with the Spirit of Enterprise Award in recognition of their support of pro-growth and pro-job policies during the first session of the 113th Congress.