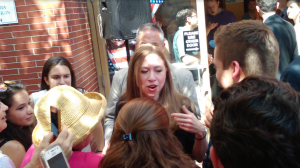 Fresh off her appearance at an NYC fashion show fundraiser the night before, former First Daughter Chelsea Clinton found herself in the cramped confines of Carlisle’s Democratic Party office on Wednesday afternoon.

Taking to the stage in front of around a hundred people packed into the workspace and spilling out onto the sidewalk Clinton told the central PA crowd about her “unapologetic” support of her mother Hillary Clinton’s presidential campaign.

For those outside, Clinton’s message was punctuated by at least a dozen tractor trailers obliging the “Honk Trump” sign painted on a truck across the street.

Clinton said her children have made her realize this year’s race pitting her mother against Donald Trump is the “most important election” of her lifetime.

“But even if I weren’t a mom, this would be the most important election of my lifetime because everything that I care most about I worry is at risk,” Clinton said during the short stopover, her first campaign event since the Democratic National Convention at the end of July. “All the progress that President Obama has made – the progress I don’t think he gets enough credit for having made to move our country forward – and all the opportunities for further progress that his leadership has really enabled.”

“It matters that she has a record of finding allies and building alliances wherever, whenever possible to actually deliver for our country and our future,” Clinton said. 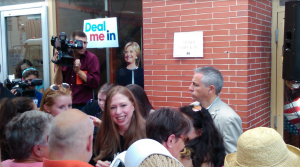 Her most pointed remarks came during a quick press conference after the speech, where she responded to Trump’s comment that Hillary Clinton doesn’t have a “presidential look.”

“I would hope that everyone could see that as the sad, misogynistic, sexist rhetoric that I hoped we had moved beyond in the 21st century, certainly in 2016,” Clinton told reporters.