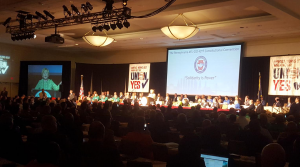 Yesterday, Hillary Clinton had the opportunity to speak at the AFL-CIO Convention held in Philadelphia.

Secretary Clinton started off by acknowledging her family’s Pennsylvania roots, explaining that her grandfather worked in the Scranton mills when he immigrated America. Clinton said she would visit him from Chicago and that those experiences allowed her to “respect the dignity of hard work”. She went on to say that fair representation on the job is at stake in this election, noting the fact that Donald Trump is instead proposing to build walls and “pitting Americans against each other”.

Clinton continued to focus her attention on her opponents by explaining that none of her competitors are prepared to accomplish the three goals she believes are vital for the next President: delivering results, keeping America safe and bringing the country together.

Hillary also took time to focus her attacks specifically on the Sanders campaign, stating that she and Sen. Sanders agree on many things but disagree on how to go about achieving the things they promise. In particular, she expressed concern for the legislation that Sen. Sanders wants to propose as President.

“Like a lot of people, I am concerned that some of his ideas just won’t work because the numbers don’t add up, others won’t even pass Congress or they will rely on Republican Governors suddenly having a conversion experience and becoming progressives,” Clinton continued asserting that “in a number of areas he doesn’t have a plan at all.”

She then went on to address raising the minimum wage and her support for Governor Wolf as well as the unions who are on the forefront of this battle. She then went back to attacking Donald Trump, who claims that wages are too high. However, she didn’t just focus her attacks on the front runner on the Republican side. Clinton also took a shot at Cruz who, as well as other Republican lawmakers, are pushing for a national right-to-work law which she stated could possibly dissolve unions and drive wages down.

Clinton pledged that if she is elected President she will work with the unions by creating new manufacturing jobs and investing in infrastructure, creating a “manufacturing renaissance”. She then moved on to address trade claiming she will stop any trade deal that won’t help American workers or raise wages. At this point, Clinton referenced her vote against CAFTA when it was brought up during her time in the Senate as well as her opposition to the TPP that was introduced last year.

The Presidential hopeful wrapped things up by asking for the support of the union members in attendance. But Clinton’s appeal for support seemed to have a tone focused looking more toward the general election rather than the approaching April 26th primary.

“If we reach for love and kindness and respect instead of bluster and bigotry, if we lift each other up instead of tearing each other down, if we stay true to the promise of America, there is no challenge we can’t meet or barrier we can’t break.”