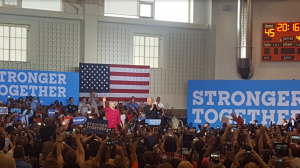 On Tuesday, Hillary Clinton campaigned in Philadelphia where she joined supporters and volunteers to launch a voter registration drive to sign up three million Americans.

She began her speech by immediately attacking Donald Trump using the Olympics as a contrasting example. Clinton declared that Trump speaks about fear, negativity and pessimism but she doesn’t see any of that in the young athletes at the games. She also compared their drive to compete to what her campaign plans to do.

“You have young people going out, doing their best every day to get prepared to compete. And that’s what we’re going to do in America,” Clinton stated. “There is nothing we can’t do if we put our minds to it.”

Donald Trump recently presented his economic plan, so naturally that was the next topic Clinton touched on. She claimed that Trump’s tax plan would give trillions of dollars in tax cuts to the wealthy, mainly as a result of his estate tax policy.

“He wants to eliminate the estate tax, which does nothing for 99.8 percent of all Americans” Clinton stated, “but if Trump is as wealthy as he claims to be, it would save his family $4 billion.”

The Democratic nominee argued that the money used from the estate tax can fund early childhood education, veteran assistance, law enforcement as well as hire public school teachers and help people get job training. She also claimed that for $4 billion we could double health care for veterans.

Clinton then brought it back to the purpose of the event which is to launch voter registration drives. During the rally volunteers were walking around with clipboards making sure attendees were registered to vote.

Clinton also asked her supporters to sign up to volunteer and canvass at one of her three dozen campaign offices throughout the state.

“I can’t do it without your help,” Clinton continued. “Now, we have packets for you at the door so you can also canvass, meet your neighbors, canvass across West Philly after this event.”

The remainder of Clinton’s speech was much of what voters have heard about her plans to create millions of new manufacturing jobs, creating a “manufacturing renaissance” and making college affordable as well as making community college free. She even referenced Abraham Lincoln’s belief of “giving every American a fair shot in life.”

Clinton continued to speak about her positions on expanding the Affordable Care Act as well as addressing addiction and mental healthcare, but managed to sneak in a jab at Trump when she got to national security by quoting Vice President Joe Biden.

“It’s not just – as Joe Biden says, it’s not just that he doesn’t know what he’s talking about. That’s bad enough. But what he often says hurts us. It sends the wrong message to friend and foe alike in the world.”

The biggest reaction from the crowd came when Clinton mentioned guns, an issue that many Philadelphians struggle with. They erupted when she asserted that she’s “going to take on the gun lobby to save lives here and across Pennsylvania.”

Recently, Clinton has been spending a lot of time campaigning in Philadelphia as well as other parts of the state. Her efforts appear to be paying off as PA has gone from being seen as up for grabs to trending towards her camp.