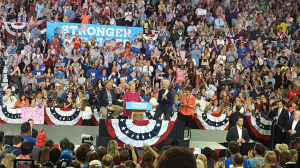 Accompanied by Tim Kaine and his wife as well as her own husband, Hillary Clinton began her bus tour through Pennsylvania by speaking in Philadelphia at Temple University.

The bus tour is going to focus on jobs as the Clinton campaign tries to win the vote of blue collar workers across the rust belt.

Clinton began her speech by thanking the people of Philadelphia for holding the Democratic convention stating she “was thrilled that so many Americans from everywhere got a chance to see Philadelphia.”

Hillary Clinton had just accepted the nomination at the convention the night before and touched on her feelings since officially becoming the nominee.

“I don’t know about you, but I stayed up really late last night,” she said. “It was just hard to go to sleep. It was so exciting and, I have to tell you, it was also kind of overwhelming. I take deeply and with great humility what this campaign imposes on us. There is no doubt in my mind that every election in our democracy is important in its own way but I can’t think of an election that is more important in my lifetime. And it’s not so much that I’m on the ticket, it is because of the the stark choice that is posed to America in this election.”

She proceeded to point out the differences people could see between the two conventions claiming that the Republicans “might as well have been talking about a different country.”

Clinton then went on a string of statements against Donald Trump’s “negative, dark, divisive picture of a country that is in decline. He insisted that America is weak…I watched and heard that. It set off alarm bells.”

In the middle of her speech, a man exclaimed “Hillary Clinton is a war criminal” and was removed immediately without any incident, while the crowd responded by chanting “Hillary!”

Clinton then brought it back to the point of the bus tour, which is to educate voters about her plan within her first 100 days in office to “make the biggest investment in new, good paying jobs since World War II.”

Before walking out to “Ain’t No Mountain High Enough” Clinton made a statement that is similar to one she has made before:

“At the end of our convention, I knew that every parent in this country could look at their son or their daughter and now say the very same thing, you too could be president of the United States.”

The rally was a kickstart to a bus tour that Hillary Clinton and Tim Kaine will be going on Pennsylvania and making stops in Harrisburg as well as Pittsburgh before continuing the bus tour into Youngstown and Columbus, Ohio.