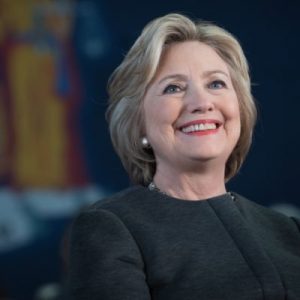 Don’t call it a comeback. More like a helping hand.

Onward Together, Sec. Hillary Clinton’s political organization, made the maximum donation of $5,000 to three Democratic House candidates in Pennsylvania in June according to the group’s filings with the FEC.

Mary Gay Scanlon (PA-5), Scott Wallace (PA-1), and Susan Wild (PA-7) each received $5,000 from Onward Together during that filing period.

Scanlon and Wild raised more money than their GOP opponents during the filing period from late April to the end of June, while Wallace and Wild currently sit with more cash on hand than their opposition.

Two of the three GOP candidates in these races, Pearl Kim (PA-5) and Marty Nothstein (PA-7), criticized the donations made from Onward Together while their opponents both responded seeing the contributions as a positive for the campaign.

“It’s not just Hillary Clinton,” said Dennis Roddy, Nothstein campaign consultant. “The bulk of Susan Wild’s campaign is running on special interest dollars from outside the district. Her latest FEC report proves it.”

Roddy said that 704 of the 1,065 contributions made to Wild were from donors outside of Pennsylvania, and just 251 of them from people in the 7th District.

“Susan Wild and her allies have put the 7th District up for sale and Hillary Clinton is simply one of the high bidders,” Roddy said.

The newly drawn 7th district, mainly based in the Lehigh Valley, narrowly voted for Clinton over Donald Trump in 2016.

“Susan Wild is running a campaign focused on the priorities of working families in the Lehigh Valley: Access to affordable healthcare, good-paying jobs, and protecting Social Security & Medicare,” from the Wild campaign. “Secretary Clinton shares these principles and we welcome and appreciate support from any individual excited about this vision.”

In the only Pennsylvania Congressional race between two female candidates, Mary Gay Scanlon and Pearl Kim, came down on opposite sides of the Clinton question – although neither mentioned the 2016 hopeful by name.

“It’s no surprise that a PAC that funds left-wing groups like Color of Change – which has attacked ICE and our border patrols while holding up Philadelphia District Attorney Larry Krasner and his anti-law enforcement agenda as a model for other cities – would back Mary Gay Scanlon,” said Pete Peterson, spokesperson for the Kim campaign. “So far, Scanlon has refused to distance herself from the radicals in her own party and their policies – like abolishing ICE – that would make our nation and communities less safe. Voters can rest assured that Pearl Kim will always fight for their interests in Congress, not the divisive agenda pushed by extremist groups.”

The newly drawn 5th district, largely based in Delaware County, voted for Clinton over Trump by close to 30 points. With a margin like that, the Scanlon campaign welcomed her donation.

“We were surprised by, and grateful for, the support that we received from Onward Together,” said Gabby Richards, Scanlon’s Communications Director. “Their mission of creating a fairer, more inclusive America is at the root of why Mary Gay is running for Congress: to be a voice for those too often ignored – to be a voice for families and children. This election exemplifies an opportunity for all Pennsylvanians, especially voters in the fifth district, to vote for fairer, more inclusive representation — now that our districts are not unconstitutionally gerrymandered.”

The Wallace and Fitzpatrick campaign did not respond for comment. The Bucks-based first district gave Clinton a slight edge over Trump in 2016.