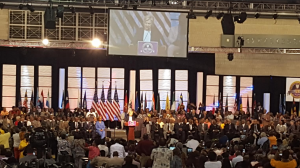 On Friday, Hillary Clinton addressed the African Methodist Episcopal Church’s General Conference which was being held at the Philadelphia Convention Center.

Clinton gave a heartfelt speech for over 20 minutes, addressing the killing of Alton Sterling in Baton Rouge, Louisiana and the police ambush in Dallas, which all happened within the 48 hours leading up to her speech.

“I have been following the news of the past few days with horror and grief,” Clinton told the crowd.

Clinton acknowledged that there are issues in America and that they need to be addressed. She maintained, however, that it wouldn’t be easy to find a place to start, noting that “no one has all the answers.”

“We know there is something wrong with our country,” Clinton said. “There is too much violence, too much hate, too much senseless killing, too many people dead who shouldn’t be.”

She pointed out that African Americans are more likely to be killed in police incidents than any other group of Americans, which Clinton attributes to police and African American communities not listening to each other.

“We need to listen,” she pleaded. “People are crying out for criminal justice reform. Families are being torn apart by excessive incarceration. Young people are being threatened and humiliated by racial profiling. Children are growing up in homes shattered by prison and poverty.”

Clinton then put forth two policy initiatives that she believes are steps in the right direction in confronting these issues.

First, she wants to bring law enforcement and communities together to produce national guidelines on when and how to enact the use of force.

“We will make it clear for everyone to see when deadly force is warranted,” Clinton stated.

The Democratic nominee acknowledged the fact that “implicit bias still exists across our society, and even in the best police departments. We have to tackle it together.”

To start tackling these issues, Clinton suggests that white Americans must do a better job of listening to African Americans when it comes to the barriers they face every day. Clinton wants people to imagine walking in someone else’s shoes for once.

“Imagine what it would be like if people followed us around stores, or locked their car doors when we walked past,” she asked. “Or if every time our children went to play in the park, or went for a ride, or just to the store to buy iced tea and Skittles, we said a prayer.”

Clinton’s speech seemed to be pivoting back to her campaign slogan “stronger together”, suggesting that in order to overcome the issues our country is facing we must do it cooperatively.

Although Donald Trump was not mentioned in the speech, it clear she was making the case to voters that his divisive rhetoric is not what the African American community and the country needs at this time.

Clinton wrapped her speech up with a passage from Galatians 6:9, “Let us not grow weary in doing good – or in due season, we shall reap, if we do not lose heart.”

“My friends, let us not grow weary. Let us plan the path forward for all of God’s children. There are lost lives to redeem, bright futures to claim,” Clinton concluded.

It should be noted that the African Methodist Episcopal Church is a nonpartisan religious organization and invited both presumptive nominees but Clinton was the only one to accept the invitation.