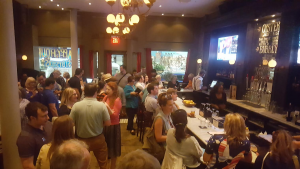 Clinton supporter and Philadelphia Mayor, Jim Kenney, was in a attendance and offered some comments regarding the historic night.

“It’s nice to be part of history, this is the first women representing a major party in a presidential election. It is an historic event, she will be a historic figure in the country after she is the first woman president of the United States.”

Kenney then went on explaining that his relationship with Clinton “was always on television and she was always under attack by somebody in Congress over something or another.”

These attacks, Kenney believes, gives Clinton a thick skin and has prepared her for what is necessary to be president. But, he also said the “real Hillary Clinton” came out to him when she toured a re-entry center in Kensington with Mayor Kenney.

“That is someone who is intelligent, kind, engaged, cares about people’s issues, talks to people directly, listens to what they’re saying,” Kenney explained, “she just bowled me over that day.”

Bernie Sanders has still yet to concede to Hillary Clinton, a decision that Kenney believes is up to Sanders and his team. Last week, Claudia Vargas of the Inquirer reported that the Sanders’ campaign plans on having a rally the day before the Democratic National Convention in Philadelphia. If Sanders continues with his promise to take his campaign all the way to the convention and rally in Philadelphia, the Mayor says that the city is prepared for that.

The city is working with the ACLU in making sure that people’s First Amendment rights are protected by having things like permanent sites for people to express their opinion.

“We expect the Democratic folks to be robust in their opinions and it’ll be a very exciting part of democracy,” Jim Kenney concluded.