Clock is Ticking for Candidates to Submit Petitions 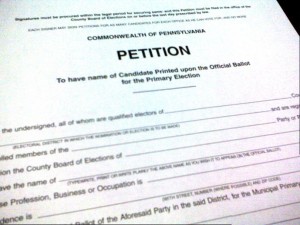 The deadline for collecting signatures to qualify for the statewide ballot for the Pennsylvania primary election is drawing closer. And the pressure is on candidates trying to reach the threshold – and more – by 5 p.m. on the March 15 date.

Candidates for governor need to gather 2,000 signatures and a minimum of 100 in at least 10 different counties. For Lieutenant Governor, those numbers drop to 1,000 and five counties.

U.S. Senate candidates are also charged with securing 2,000 signatures but with no stipulation on where they can be collected. For the U.S. Congress, they need 1,000 signatures from within their district.

But don’t think for a moment that reaching the bare minimum gets the job done.

“You’re always going to get bad signatures so if you don’t have significantly more than the legal requirement you’ll get challenged,” said gubernatorial candidate Charlie Gerow to WHTM-TV.

Citizens must be registered to vote in that party to sign a petition and may only sign for one candidate per race. Double up and it most likely will be challenged in court.

With the deadline looming in five days, expect to see a busy weekend of signing parties and supporters of candidates working their neighborhoods for signatures.

“I expect, quite frankly, that some of the Republican governor candidates are not going to meet the minimum requirement,” said election law attorney Larry Otter to abc27.

State Senate candidates must get 500 signatures and State House candidates only need 300, but they can’t start collecting them until a court rules on the districts.