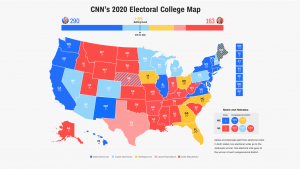 The presidential race has, once again, shifted back in the Democrats favor in Pennsylvania, according to CNN’s 2020 Electoral College map.

In an article published on October 7, Pennsylvania moves from the Battleground into the Leans Democratic category.

The analysis cites a bevy of recent polling for the rating change.

“Since our last Electoral College outlook, there have been no fewer than eight polls that meet CNN’s reporting standards out of Pennsylvania — a critical battleground state for either candidate’s path to 270 electoral votes,” writes CNN’s David Chalian and Terence Burlij. “Biden never held less than a 5-percentage point lead in any of them and his support level was never below 49%. We are moving Pennsylvania back to Leans Democratic.”

They also added that the Biden campaign has outspent the Trump campaign $48 million-to-$21 million in the Keystone State.

In CNN’s debut 2020 electoral map published in June, Pennsylvania was listed in the “Battleground” category. CNN later moved Pennsylvania from Battleground to Leans Democratic in early-August, but then moved it back to the Battleground category until the latest ratings change.

This is the first map that shows Biden crossing the 270 electoral threshold to capture the White House.

CNN joins the Cook Political Report, Larry Sabato’s Crystal Ball, and Politico, in rating the race as Leans Democratic in the state.