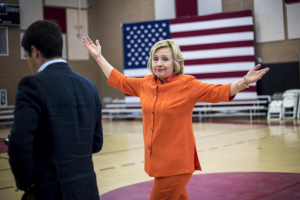 The presidential contest in Pennsylvania, and nationwide, is a dead heat.

That’s according to the new CNN/ORC poll, which has Clinton at 50% and Trump with 47% among likely voters.

The Democratic nominee and former Secretary of State holds the advantage when it comes to foreign policy (59/37), immigration (50/48) and terrorism (49/48). Meanwhile, Trump is ahead on the topic of the economy (50/47).

Respondents also believe that Clinton “has the temperament to serve effectively as President” (60/34) and “can handle the responsibilities of commander in chief” (55/41).

On the other hand, voters think Trump “has the stamina to serve effectively as President” (50/45) and “is more honest and trustworthy” (48/42).

Clinton’s advantage in Pennsylvania is narrowing, especially if Gary Johnson and Jill Stein perform as well on Election Day as they do in this survey. The silver lining for Clinton, though, is that while her lead is razor-thin it is still a lead and PA’s twenty electoral votes are winner take all.

This poll was conducted by ORC International on behalf of CNN from September 20th to 25th. They surveyed 771 likely voters. The margin of error is +/- 3.5%.