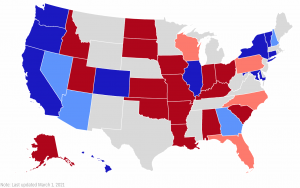 Control of the U.S. Senate after the 2022 election will likely come down to a few states, but according to this national outlet, Pennsylvania is the seat most likely to flip parties.

According to CNN, Pennsylvania is ranked as the Senate seat that is most likely to flip partisan control in the 2022 election in it’s inaugural Top 10 rankings released on March 3.

The analysis from CNN’s Simone Pathe notes that Sen. Pat Toomey (R) is retiring after his current term, making this state “even more competitive than it otherwise would have been.”

“Biden’s win here was a shift from four years ago, when Trump narrowly carried the Keystone State in 2016,” Pathe writes. “That same year, Toomey won reelection by less than 2 points, defeating a Democratic nominee who attracted big-time endorsements but wasn’t the strongest campaigner.”

“As with all open seats, the contours of this race will depend on who runs — and who wins each party’s nomination,” Pathe continues.

The analysis goes on to mention Lt. Gov John Fetterman and state Rep. Malcolm Kenyatta (D-Philadelphia) as candidates who have formally launched a campaign.

Pathe describes Fetterman, who finished third in the 2016 Democratic Senate primary, as the “tattooed former mayor of Braddock, a working-class town east of Pittsburgh,” who “sells himself as a progressive who can appeal to voters who saw something in Trump” and references his campaign “touting big fundraising” thus far.

Kenyatta is described as a “Biden surrogate during the 2020 campaign,” and referenced him being the “first member of color who identifies as gay in the state Legislature.”

Pathe writes that members of the Democratic congressional delegation may join the race as well.

On the GOP side, Pathe describes the race to succeed Toomey as “wide open” and “may attract a range of candidates on the spectrum of Trump loyalty,” and adds that “prominent Trump critics” like former GOP Reps. Ryan Costello and Charlie Dent could launch a bid for the seat.

CNN is just the latest national outlet to place Pennsylvania’s Senate race in a category that indicates the seat is up for grabs in 2022.

Larry Sabato’s Crystal Ball rated Pennsylvania’s Senate race in 2022 as the lone Toss Up of the cycle in its initial ratings, the Cook Political Report listed Pennsylvania’s race as one of two states that are considered to be Toss Ups, and Inside Elections describes labels the Keystone State as a “Battleground” for the 2022 Senate race.