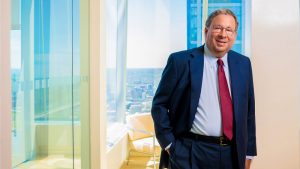 It was 2019 in Mt. Airy, and Joe Biden was holding his very first fundraising event as a presidential candidate. The host? Comcast Executive David L. Cohen.

One of the biggest powerbrokers in Pa. politics, Cohen’s support helped anchor Biden’s campaign throughout the primary.

Now he may join Biden’s administration. According to Politico, Cohen is believed to be the frontrunner for U.S. ambassador to the United Kingdom. The report mentions that diplomatic officials from the U.K. see him as the frontrunner, although a friend of Cohen’s said that he is interested in the ambassadorship or being the secretary of Commerce.

Cohen is one of the most influential people in Pa. Democratic politics — despite never serving in elected office. He served as the Chief of Staff under then-Philadelphia Mayor Ed Rendell before becoming an executive at Comcast. He’s also served as Chairman of the Trustees of the University of Pennsylvania and its Executive Committee for over a decade.

4 thoughts on “Comcast’s Cohen Is Frontrunner for UK Ambassador”