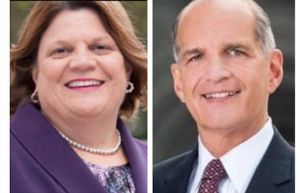 It’s been a tumultuous two and a half weeks in the Pennsylvania GOP, but the intra-party fighting to lead the state committee appears to have come to an end.

In a joint statement released by the Pennsylvania Republican Party, Acting Chair Bernie Comfort withdrew her bid for the race for Chair, making way for former state GOP counsel Lawrence Tabas to complete the term of former Chair Val DiGiorgio.

DiGiorgio stepped down from his position as Chair on June 25 after the Philadelphia Inquirer released a story of him exchanging sexually charged messages and an “explicit photo” with a GOP Philadelphia City Council hopeful.

The press release states that Tabas will take over as Chair of the Pennsylvania GOP, while Comfort will remain in her role as Vice Chair and will be appointed by the Trump 2020 campaign to lead as the Campaign Chair in Pennsylvania, a role that former Reps. Lou Barletta (R-Luzerne) and Tom Marino (R-Lycoming) shared in 2016.

This joint statement was released less than 24 hours from a Philadelphia Inquirer story detailing a woman accusing Comfort of ignoring sexual harassment claims from women in the party made towards DiGiorgio.

“When this race for PA GOP Chair unexpectedly began just a few short weeks ago, each of us entered with the same goals in mind, unifying and strengthening our Party and supporting President Trump’s re-election efforts in the Commonwealth,” Comfort and Tabas said in the written release. “It has become clear that each of our respective campaigns had a great deal of support. Therefore, we are joining together to form a unified team.”

Trump weighed in on Twitter calling the two a “great team,” while stating, “We must have, & do, great UNITY in PA!”.

We have a GREAT TEAM in Pennsylvania! I’m proud to say that our good friends Lawrence Tabas & Bernadette “Bernie” Comfort will now be working together to run the @PAGOP. Lawrence will be Chairman & Bernie will Chair my Pennsylvania Campaign. We must have, & do, great UNITY in PA!

Sources tell PoliticsPA that insiders on both sides were predicting a Tabas victory in a contested vote.

The Pennsylvania GOP confirmed that the vote for Chair is still set for tomorrow in Hershey.