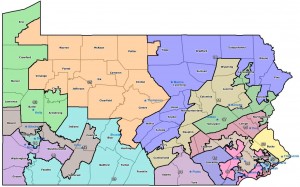 Since the publication of PoliticsPA’s initial congressional-seat vulnerability ranking of the 2012 cycle last December, a handful of GOP-held seats have slipped further from the Democrats. Underdogs won Democratic primaries in two districts – the seats currently held by GOP Reps. Lou Barletta and Charlie Dent – adding to the Democrats’ general election challenge in two contests that were already uphill battles. Only one GOP-held seat has become appreciably more vulnerable – the one occupied by Rep. Tim Murphy.

These ratings are based on consultations with a range of state and national political experts. As always, we list the seats in descending order of vulnerability, which we define as the likelihood of the seat switching party control in the 2012 election.

Pre-primary conventional wisdom had it that Altmire would be a stronger general-election candidate than Critz, given his moderate ideological positioning and the fact that he represented a larger swath of the district. That may still be true, but Critz’s stunning upset – driven by the aggressive and effective ground work of his labor-union supporters – has roiled the contest. On the upside, the victory sealed Critz’ reputation as someone who can win challenging races (something he initially did in his tough special election win in 2010), and the hard-fought campaign gave him needed exposure throughout the district. He will face second-time (and less-than-first-tier) Republican candidate Keith Rothfus, who came close but failed to unseat Altmire in 2010, a year when everything seemed to go right for Pennsylvania Republicans. The district leans Republican, so “anyone looking at this seat would have to agree that this is super-vulnerable for the Democrats,” acknowledged one union observer. “Critz can win, but will need labor to do even more for him than was done in the primary.” Critz’s primary win has given him momentum; he can win it, but it won’t be a walkover. This remains the most vulnerable congressional seat in Pennsylvania.

Fitzpatrick’s swing district in Bucks County remains the most promising for Pennsylvania Democrats. Republicans are painting Democrat Kathy Boockvar as a “radical activist” whose former employer did work for ACORN; Democrats laugh off that approach as a sign of GOP difficulty in finding her vulnerabilities. As the incumbent, Fitzpatrick will have the advantage, but if Boockvar can raise enough money to remain competitive and if Democrats come out to support President Barack Obama, she has a chance.

A lot has happened in Murphy’s southwestern Pennsylvania district since our last rating. The incumbent survived a primary – with room to spare – against Evan Feinberg, who challenged him from the right. But two factors give Democrats a measure of optimism. Murphy had to move right to battle Feinberg, complicating his longstanding labor-tolerant profile, which had been appealed to voters in the working-class, ancestrally Democratic district. And Democrats think they have a candidate who can capitalize – Larry Maggi, a former Marine, state trooper, sheriff and county commissioner. Before this race moves up the list, though, Maggi will have to prove his mettle as a fundraiser; Murphy has around $1 on hand million even after the primary.

Democratic physician Manan Trivedi is making another run at Gerlach, a multiple survivor in districts more Democratic-leaning than the current incarnation. While Gerlach leads in fundraising, Trivedi has impressed some observers with his take.

Like Maggi in the 18th district, George Badey is another Democratic challenger who will have to prove he can raise the money to stay competitive, along with the added challenge of raising his name identification. Meehan — whose district zig-zags through Montgomery, Delaware, Chester, Lancaster and Berks counties — may face a Democratic tide at the top of the ticket, but he doesn’t appear to have developed too many vulnerabilities in his first year in Congress.

Democrats suffered a setback in this moderate Lehigh Valley district when the DC-establishment-backed candidate, Jackson Eaton, lost by a wide margin to Lehigh County Democratic Chairman Rick Daugherty despite spending more than 10 times as much as Daugherty on the race (Daugherty raised a mere $8,000). Dent’s relatively moderate profile has helped him survive in swing territory for several cycles running. Daugherty now has to prove that he has the chops to compete against an incumbent of Dent’s caliber.

7. Mike Kelly (R, 3rd district). Kelly’s western Pennsylvania district is potentially competitive for Democrats, but Democratic challenger Missa Eaton is a relative unknown, and  Democrats concede that Kelly has worked the district well. This one’s still on the radar, but it may not stay there indefinitely.

Barletta’s previously Democratic-friendly district went strongly Republican thanks to the GOP-led redistricting. The task got marginally tougher with the Democratic primary results, as Gene Stilp – best known for his pink, pig-shaped bus – defeated assistant Wilkes-Barre city attorney Bill Vinsko. Stilp has proven a tough campaigner in the past; he nearly knocked off a Republican incumbent for state house in 2010. But he’s not a fundraiser, which will be required for this seat. Regardless of the Democratic nominee, some in the party were already close to writing off the district.

Marino, like Barletta, was a big winner in the remap, though his district was more heavily Republican to start with. Little-known businessman Phil Scollo is the Democratic nominee. Barring something unexpected, this contest may not even last much longer in the “minimally vulnerable” category.

This mid-range GOP-leaning seat is more likely to become competitive once Pitts, 72, retires. The Democrats’ one hope – and it’s a stretch for now – is a surge of women voters opposed to Pitts’ strong stance against abortion, combined with a generalized anti-incumbent wave. Army veteran and software consultant Aryanna Strader, the Democratic nominee, may have a future, but don’t bet on her for 2012.

Platts’ decision not to seek another term led to a seven-way GOP primary in this solid Republican seat. State Rep. Scott Perry won a clear majority and should have no trouble in the fall.