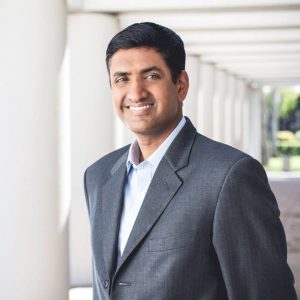 The Pennsylvania Democratic Party announced that Rep. Ro Khanna (D-CA) will be the keynote speaker for their upcoming Winter Dinner on Jan. 31 in Harrisburg. Khanna, who was elected in 2016 after defeating eight term incumbent Rep. Mike Honda (D-CA), comfortably won his 2018 bid for the seat over Republican Ron Cohen by 51 points in the solid Democratic seat.

An email from the Pennsylvania Democratic Party late last week promoting the event announced Khanna, a Pennsylvania native, as the keynote speaker and lauded him as a “leading progressive voice” in the U.S. House.

“We’re thrilled to announce that the PA Democrats’ Winter 2020 Dinner will feature a keynote address from our special guest, Congressman Ro Khanna,” the email from the Pennsylvania Democratic Party said. “Born and raised in PA, Congressman Khanna now represents California and is a leading progressive voice in the US House.”

PoliticsPA is seeking comment from the Pennsylvania Republican Party on Khanna being selected as the keynote speaker for the event. The PA GOP’s winter dinner last week was headlined by Sean Parnell, a U.S. Army combat veteran and conservative author, who is seeking the Republican nomination for the 17th Congressional District.

While a majority of Pennsylvania’s Democratic Congressional delegation has endorsed former Vice President Joe Biden’s bid for the White House, Khanna pledged his support for Sen. Bernie Sanders. According to an article from the San Francisco Chronicle in Feb. 2019, Khanna was one of only nine House Democrats to endorse Sanders over Sec. Hillary Clinton in the 2016 Democratic presidential primary and serves as a top advisor to Sanders’ 2020 presidential run.

The PA Dems dinner at the Harrisburg Hilton will begin at 7 PM.