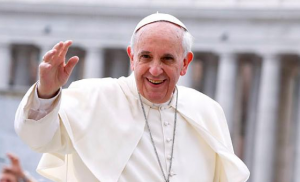 Today Pope Francis will become the first Pontiff to address a joint meeting of Congress.

Since every Senator and Representative gets to bring one guest into the House chamber we decided to ask every PA member about their guest. PoliticsPA reached out to all twenty representatives, the following answered.

The state’s senior Senator is bringing his wife Terese.

Rep. Kelly will be accompanied by his wife Victoria.

Father Joshua R. Brommer is a priest of the Diocese of Harrisburg functioning as the Rector/Pastor of Saint Patrick Cathedral, Harrisburg and the Director of the Office for Divine Worship.  After receiving a B.A. in Philosophy and English Literature from the Pontifical College Josephinum, Columbus, OH he earned a S.T.B and S.T.L from the Pontifical Gregorian University, Rome, Italy with a focus in Systematic and Dogmatic Theology.

Rep. Costello will be accompanied by Jeannine Ferrante. She is an 86 year old West Pottsgrove Township resident and has been an active member of the St. Gabriel of the Sorrowful Mother Parish in Stowe for over 65 years.

Rep. Rothfus will be accompanied by his wife Elsie.

Rep. Doyle will be accompanied by Pittsburgh’s Bishop, Bishop Zubik.