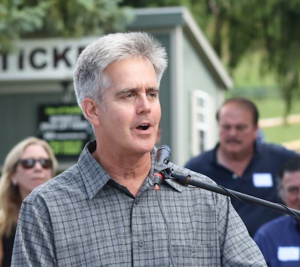 “I have always thought of myself as a hard working voice for working people, and have served with the trust of those I represent in Harrisburg,” Conklin said in a release. “Now, I believe is the time to use my voice for all Pennsylvanians by holding our government accountable.”

The release about his announcement says that if elected, he’d continue to “build upon” the confidence that residents of the state have in the Auditor General’s office and ensure that tax dollars are spent “responsibly and legally across the board,” while also maintaining his attention on government funded programs to guarantee that resources are being managed “efficiently and appropriately.”

Conklin also touts his 20 years of experience in government in the announcement, pointing to his record previously serving as Chairman of the Centre County Commissioners and being in charge of balancing a $90 million budget and using that experience in the state legislature by earning a seat on the appropriations committee as a freshman.

“I want to leverage those decades of experience to help all Pennsylvanians” Conklin said.

Conklin, who has served in the state House since 2007, adds that his experience with legislation “combating domestic violence, encouraging economic investment, and fighting against partisan politics,” are valuable assets that will help him lead the Auditor General’s office.

On the topic of agriculture, Conklin describes the current state of “traditional farming tradition” as “under siege” and advocates for a number of programs including pushing for low interest loans and grant opportunities to keep “farming affordable,” supporting “new organic farming methods which help protect human health and don’t contaminate our environment,” and more. Conklin’s business plans emphasize the importance of small businesses in Pennsylvania and calls for providing “smart incentives” for businesses to locate in the state, developing and implementing “new green collar jobs in renewable energy,” while also supporting policies to ensure the “responsible exploration of the Marcellus Shale,” and protecting communities simultaneously. Conklin also added that improving the transportation infrastructure in the state as a priority under the business section of his plans.

Conklin said he was to hold a “Constitutional Convention” under the government section of his platform page, where he calls to “downsize a bloated legislature,” make early voting available, impose term limits to ensure that elected officials “don’t become complacent and out of touch with the people,” and instituting performance audits for all state agencies. His economic plans reiterate positions under previous sections by advocating for cutting taxes for small businesses, developing and implementing “new green collar jobs in renewable energy,” supporting policies to ensure the “responsible exploration of the Marcellus Shale,” and improving the state’s transportation infrastructure.

On education, Conklin prioritizes supporting the expansion of the Pre-K counts program, continuing to support funding for public and higher education, and working towards the legislative reforms called for by the “Jobs of the Future” report. His energy plans say that he will encourage development of “clean energy technologies” in hopes to create jobs and reduce use of Middle Eastern oil, create “lasting jobs” though development of the Marcellus Shale, developing and implementing “Clean Coal technologies” aimed at reducing dependence on foreign oil and making coal a part of the “clean energy future” and more. Conklin says that the state must protect natural resources from unnecessary harm, promote land conservation, and push for businesses and communities to adopt more “environmentally friendly technologies and practices,” under his environment plans.

Conklin’s healthcare plans, which appears to be the largest section of his platform page, says that he supports “common sense, bi-partisan solutions to this healthcare crisis.” He points to his vote in favor of the Pennsylvania Access to Basic Care (ABC) program that would provide access to basic healthcare for more than 270,000 uninsured Pennsylvania workers and said that the cost of this would be paid for by increasing the tax paid on cigarettes and other tobacco products. He also highlights supporting access to healthcare in rural regions of the state as a priority and views the ABC program as something that would help those living in rural areas of the state. He also adds that he supports the removal of “regulatory barriers” that limit use of non-physician providers such as Nurse Practitioners and Physicians Assistants, which he believes could increase access to basic care for rural residents.

Conklin touts his vote in favor of property tax relief, advocating for strengthening guidelines for long term care, and supporting the implementation of the 2008-2012 State Plan on Aging for his plans to assist Senior Citizens. In an effort to “strengthen communities” Conklin said he supports Supporting Community Fireman through grants, tax breaks and by allowing them to hold “legal Texas Hold’Em tournaments” as fundraisers, creating an “Arson Registry since Arson has a high recidivism rate and this would help our law enforcement officials reduce crime rates,” and more. The plans under his “help families” section wraps up a number of initiatives under previous sections, saying that he “strongly supports working families.”

This will be Conklin’s second bid for a statewide office. In 2010, he was the Democratic Party’s Lt. Governor candidate after he bested Jonathan Saidel and Doris Smith-Ribner in the primary to run alongside Dan Onorato. Republicans Tom Corbett and Jim Cawley defeated Onorato and Conklin by close to 10 points in the race.

While Conklin’s formal announcement for the office was made public on Monday, he told PoliticsPA in an interview in October that he was “very seriously” considering a bid for the Auditor General’s office, saying that he visited at least 40 counties over the summer and received great responses about a possible run for the seat. During that interview, he told PoliticsPA that he wanted to continue the work of Auditor General Eugene DePasquale and believed his record in the state House since 2007 and serving as Centre County Commissioner for two terms prepared him for the office.

Another Democrat who has been laying the groundwork for a run for the statewide office is former Philadelphia City Controller Alan Butkovitz, who told PoliticsPA at PA Society in December that he will run for the seat and planned to have a formal announcement after the new year. Ahmad, Butkovitz, Conklin, Hartman, and Lamb were all present at the Democratic Party’s fall state committee meeting in September, where their names first surfaced as possible candidates for the office.

On the Republican side, only two candidates have formally entered the race, Lancaster County Commissioner Dennis Stuckey and Dauphin County Controller Tim DeFoor. Sources told PoliticsPA over PA Society weekend that state Rep. Mike Tobash (R-Schuylkill) was also interested in the seat, although he hasn’t formally announced a run.