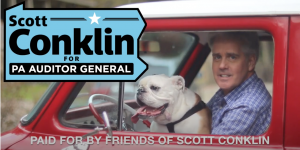 The Democrat from Centre County running for Auditor General is on television with a 60 second spot.

State Rep. Scott Conklin (D-Centre), one of six Democrats seeking the party nomination for the statewide office, released an ad showing the candidate driving around the state with his dog, Lucy, as he pitches a message of unity in response to the coronavirus pandemic.

“The past few months have been hard for all of us,” Conklin says in the 60 second spot, “A New Day is Coming.” “But as spring turns into summer as Pennsylvania begins to open up, people are going to need help.”

“Our family members may need care, our friends might be out of work, our neighbors may have lost someone close to them, but things will get better,” Conklin continues to say in the ad. “Because when we work together, we can accomplish anything.”

Conklin continues to offer optimism in the rest of the ad and urges those to look out for one another, while describing himself as the candidate that will be a “strong voice for hard working Pennsylvanians.”

“This spring, take a moment to drop by your favorite small business or give some time to help family members,” Conklin says in the ad.

“We all need to work together to rebuild Pennsylvania,” Conklin continues. “But I know we’re up to the task.”

“I’m running for Auditor General so that I can be a strong voice for hard working Pennsylvanians,” Conklin says at the conclusion of the ad. “I’m Scott Conklin and Lucy and I approve this message.”

Conklin also introduces his wife, Terri, at the beginning of the ad.

The Conklin campaign did not respond to comment about specifics of the TV ad buy, but an email to supporters on May 21 said that their message of “optimism” in the TV ad spread “far and wide across the state”

Conklin is not the only candidate in the crowded Democratic race on television. Pittsburgh City Controller Michael Lamb has released a 15 second spot that is airing in five different markets in the state that promotes endorsements from various labor, teacher, and firefighter unions across the state and touts his experience in public office.