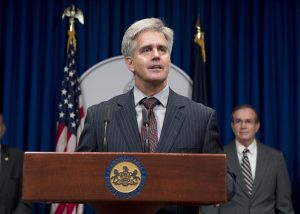 The field of prospective Democratic Auditor General candidates stands at five. Scott Conklin, a Centre County State Rep, told PoliticsPA that he is “very seriously” weighing a run in 2020.

“This year I’m looking at it very closely, I’ve been traveling the state, getting a lot of support, visiting county after county, retracing many of the counties that endorsed me and helped me in 2010. They seemed all to be anxious and willing to help me again, which is a blessing in itself,” Conklin said. “So yes, I’m looking very seriously at it.”

Meanwhile Olivia Benson, a politico and non-profit leader from Pittsburgh who expressed interest in the office back in January, told PoliticsPA that she is not running for the seat.

Conklin has served in the state House since 2007 and previously made a bid for a statewide office in 2010, when he was the party’s Lt. Governor candidate. Conklin bested Jonathan Saidel and Doris Smith-Ribner in the Democratic primary to run alongside Dan Onorato. Republicans Tom Corbett and Jim Cawley defeated Onorato and Conklin by close to 10 points in the race.

He said he visited at least 40 counties over the summer and received great responses in them and pointed to his 2010 bid as preparing him to connect with voters across the whole state in a possible bid for Auditor General.

Prior to being elected to the state House, Conklin served as Centre County Commissioner for 2 terms. Conklin said that his experience as a county commissioner, coupled with his business background, and serving in the state legislature has properly prepared him for everything an Auditor General has to do.

“I have had that opportunity in my life, to work with the nuts and bolts of everything that an Auditor General does,” Conklin said.

Conklin said that he could not pinpoint one specific priority he’d have if elected to the office, saying that there are a number of pressing issues to Pennsylvanians, but lauded the work of previous Auditor Generals and adding that he views the role sort of like being “an Ambassador” for the state.

“We’ve been very fortunate, we’ve had great Auditor Generals over the last 20 years,” Conklin said. “I want to continue what Eugene (DePasquale) has done and Jack Wagner did and Bobby Casey, Katherine Baker Knoll and everybody across board.”

“First off, the Auditor General’s office is blessed with, I believe, the best workers you can ever have and if I’m elected Auditor General, everyone of those workers stay,” Conklin said. “Because there the ones that understand, I was talking about the volunteer fire companies and looking at school districts, they understand that.”

Conklin hasn’t set a specific deadline of when he decides to make a decision of whether or not he’ll seek the seat, but said in the meantime he’s continuing to go to different counties and asking for their support.

“We’re going to finalize what we’ve already started sometime over the next couple of months,” Conklin said.