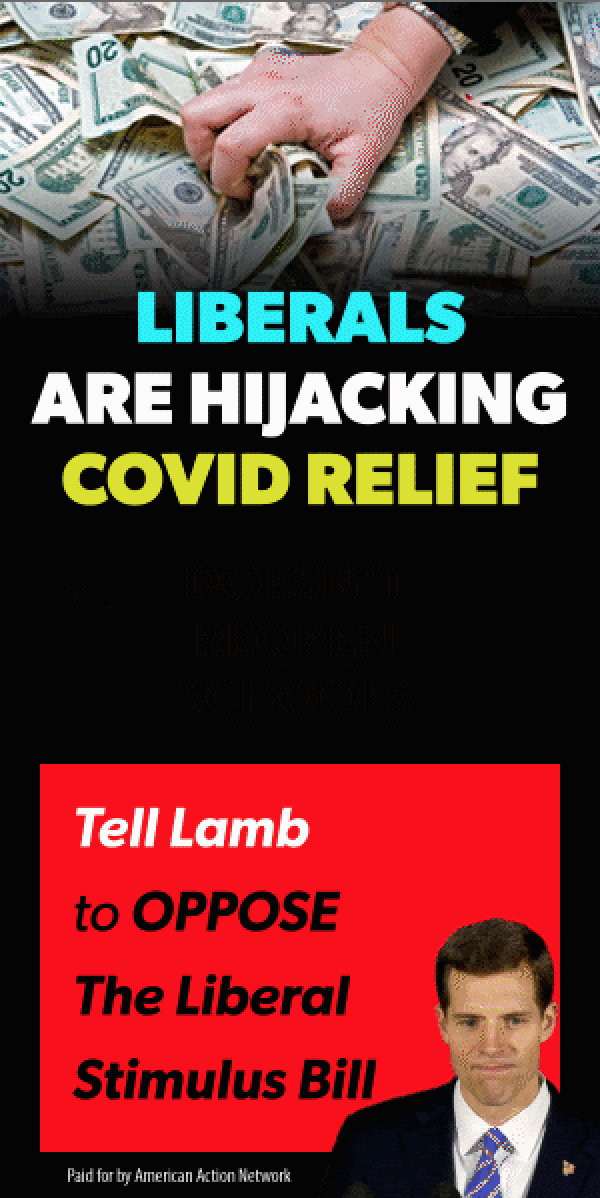 As Republicans try to push back on the House Democrats $1.9 trillion COVID-19 relief bill, which has received high marks from the general public thus far, a conservative group is pressuring one Pennsylvania Democrat to oppose the legislation.

American Action Network, a group that promotes “center-right solutions to our nation’s challenges,” has launched digital ads and phone calls in 11 House districts for this issue advocacy campaign, including Rep. Conor Lamb (D-Allegheny).

The digital GIF ad says that “Liberals are hijacking COVID Relief,” and goes on to accuse the 11 targeted Democrats of backing a bill that is a “Blue state bailout,” that “doesn’t reopen schools,” and provides “Tax $ to illegal immigrants.”

“Dollar for dollar, this bill does far more to fund the far-left’s socialist political agenda than it does to deliver meaningful relief to the families and small businesses who need it most,” said AAN President Dan Conston. “Congress should reject this shameless power grab and instead pass targeted legislation that gets aid to families, reopens schools and helps small businesses recover as quickly as possible.”

Lamb fired back at AAN for the ad campaign targeting him in a Twitter thread that includes some of the reasons he says he supports the legislation.

“They’re back! Our dark money friends at Kevin McCarthy’s @AAN/@CLFSuperPAC are already running ads in #PA17 attacking me for supporting the COVID rescue plan,” Lamb wrote in the first tweet in a thread. “Their disinformation didn’t stop on Election Day. Help us fight back with the truth: https://secure.actblue.com/donate/aanclf”

They’re back! Our dark money friends at Kevin McCarthy’s @AAN/@CLFSuperPAC are already running ads in #PA17 attacking me for supporting the COVID rescue plan.

Their disinformation didn’t stop on Election Day. Help us fight back with the truth: https://t.co/wBPjxT0xJy https://t.co/j7uAPHRl8h

“They call it a “liberal stimulus bill.”

-$1400 checks for millions of Americans

-More $ for vaccinations & testing in ALL states, red & blue

-More $ to help schools reopen in ALL states

“-More $ to save government jobs in ALL states

The effort from AAN is one of the first paid efforts to oppose part of the Biden administration’s agenda in Pennsylvania. Despite GOP effort pushing back on the Dem backed-proposal, polling from Morning Consult notes that 76% of voters, including 60% of Republicans, either “strongly” or “somewhat” support the Democrats $1.9 trillion plan.

Earlier this week, Lamb joined Sen. Bob Casey (D) and Rep. Dwight Evans (D-Philadelphia) in voicing his support for raising the federal minimum wage to $15 an hour in the COVID-19 relief bill.

Lamb had the closest reelection bid for any of the Pennsylvania congressional incumbents in 2020. The Allegheny County Democrat bested GOP challenger Sean Parnell by just over 2 points to secure his second full term in Congress.

The 17th District that Lamb represents went to Trump in 2016 by just a couple of points, although it shifted a few points in the Democrats favor when Joe Biden edged out Trump in the western PA District in the 2020 election.