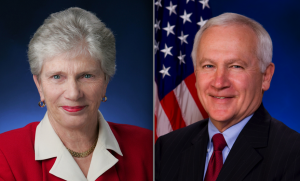 Citizens Alliance of Pennsylvania, a group whose focus is enforcing conservative orthodoxy among Republican lawmakers, is taking aim at two members of the PA Senate who they blame for stalling several pieces of legislation.

Pat Vance (R-Cumberland) and Gene Yaw (R-Lycoming) are bearing the brunt of CAP’s opening salvo, which a press release from the group said consisted of a television and radio campaign with a price tag in the six-figures.

In a conversation yesterday, Leo Knepper, newly-minted CAP Executive Director, said Vance’s constituents would see more TV ads – primarily on ABC 27 – while the push in Yaw’s district would be mostly on the radio.

He said the group might release a full copy of the ad later in the week, but not before. ABC 27 ran a story about the ad buy (video below), and you can see part of the Vance ad in their coverage. It includes an image of Vance inside a heart with a picture of former Governor Ed Rendell and blasts her votes in favor of several state budgets during his time in office.

Here are the TV ads:

In an interview with ABC 27, Vance fought back against the charge that she was insufficiently conservative.

Vance further criticized CAP for not disclosing its donors.

Knepper said the problem was more than just Vance and Yaw. He said the entire PA Senate should be taking heat for its slow pace on a number of conservative items, including the voter ID bill, school choice and changes to the prevailing wage.

“Pennsylvania has a Republican House and a Republican Governor,” Knepper said. “But we aren’t seeing the progress that several other states have made.”

Knepper pointed to New Jersey’s pension reform – shepherded through a Democratic legislature by Republican Governor Chris Christie – as the standard PA’s GOP should be striving to meet.

“That’s [vouchers are] part of it,” Knepper said, “but not nearly all.”

Vance and other lawmakers have taken heat from the right over the vouchers issue before. In April, CAP threatened to recruit and fund primary challenges against any Republican who voted against SB1, the Senate’s school choice bill. And the national group Freedomworks, which is affiliated with the Tea Party movement, targeted her with a pro-vouchers mail piece in the spring.