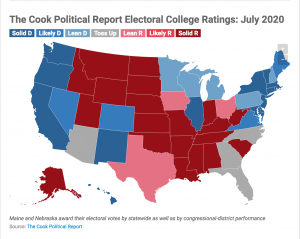 Pennsylvania is no longer a Toss Up, according to the latest Electoral College ratings from the Cook Political Report.

In an article published on July 8, Pennsylvania moves from a Toss Up into the Leans Democrat category.

Amy Walter writes that the presidential election is looking “more like a Democratic tsunami than simply a Blue wave,” as she moves Pennsylvania, Wisconsin, and Nebraska’s 2nd District from Toss Up to Lean Democrat.

The most recent rating change also puts Biden at 279 electoral votes, which is over the 270 threshold needed to capture the White House.

This ratings update is the first time that Pennsylvania moved out of the Toss Up column since the Cook Political Report debuted their 2020 Election College Ratings in January 2019. This is also the first time that either candidate had enough electoral votes needed to win the presidency.

The Cook Political Report is not alone in moving the race into Biden’s favor for the Keystone State.

While the presidential race has moved into Biden’s favor, there are still two House races in Pennsylvania listed as Toss Ups. In their latest House ratings released on July 2, Reps. Matt Cartwright (D-Lackawanna) and Scott Perry (R-York) are both in races listed as toss-ups.